On this day, 60 years ago, the first human flight into space took  place 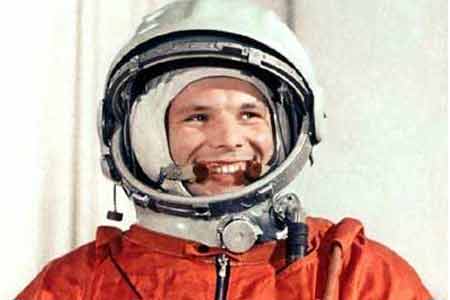 ArmInfo. On this day, 60 years ago, the first human flight into space took place.

As it was presented in detail by the Russian Embassy in Armenia:   "Yuri Gagarin and his understudy German Titov arrived by bus at the  launch pad of the Baikonur cosmodrome on April 12 at about 7 am.  It  was attended by many more mourners than the protocol schedule  provided for. One of them was the creator of the Vostok spacecraft,  Sergei Korolev, who gave Gagarin the last parting words before the  launch.

Together with Yuri, the ship's designer Oleg Ivanovsky took the  elevator, who helped the cosmonaut to get into the lander.

"All the launch, refueling and auxiliary equipment of the launch site  is ready for launch!" - it's coming over the speakerphone. There are  about ten minutes left before the launch. The hands of the clock are  approaching the decisive mark. The command follows: "Minute  readiness!" In a minute, the control of the rocket will be  transferred to the automation. "There is a starting readiness of the  object!".

From now on, all control of the launch is concentrated in the hands  of the rocket scientists. The spacecraft is fully ready for its  historic mission! Everyone's nerves are stretched to the limit. In  the silence, the commands of the head of the launch service, A. S.   Kirillov, sound one after another.  "The key to start!" - by turning  a special key, the automatic launch of the rocket is activated. And,  finally, a short command: - "Start!" - " Rise!"

- "There is a rise" - at 9: 07 Moscow time, the operator of the  central control panel of the rocket shouts loudly.

They are released and diverge to the sides of the launcher truss.   From the growing hum of the engines, the bunker shakes, puts the  ears. - "Let's Go!" - the voice of Yuri Gagarin bursts out of  the speaker:".