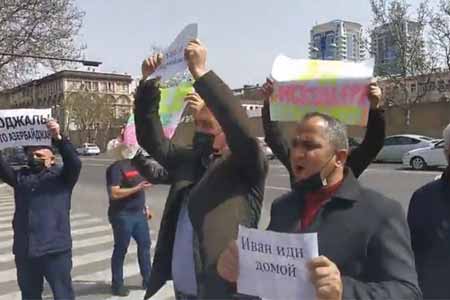 ArmInfo.A large group of Azerbaijani youth organized a picket in front of the Russian Embassy in Azerbaijan on Friday. Participants of the action, representing the youth wing of the Musavat party, protested against the use of Iskander-M missiles  during the Second Karabakh war, and demanded an explanation from  Russia.

According to Baku media reports, they also demanded that the Russian  peacekeepers not interfere with the movement of Azerbaijanis in  Nagorno-Karabakh. The protesters raised posters with slogans: "Russia  - hands off Karabakh!", "Karabakh - Azerbaijan!", "Lachin -  Azerbaijan!", < Ivan - go home!>

The police did not interfere with the action.

The protesters read out a resolution stating that the missile attack  on Shushi with Iskander-M missiles became an aggression against  Azerbaijan.