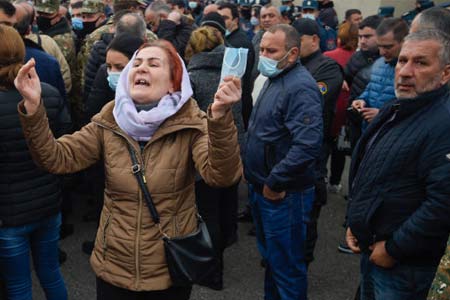 ArmInfo. The issue of the return of Armenian prisoners of war continues to be an "Achilles' heel " for the Armenian society, and any mention of it causes an  extremely painful reaction and gives rise to hopes for an early  resolution of this issue.

Another such hope was kindled in the hearts of the relatives and friends of the prisoners of war, when a number of media outlets, citing sources in government circles,  reported that a group of prisoners of war was returning to their  homeland by the special board of the head of the Russian peacekeeping  contingent in Nagorno-Karabakh, Rustam Muradov.

So, first, the information about the arrival of a group of prisoners  of war was reported by the deputy from the ruling "My Step" Nazeli  Baghdasaryan. This news was immediately picked up and replicated by  the pro-government media. Then, the information was confirmed by the  press secretary of the Prime Minister of the Republic of Armenia  Nikol Pashinyan, Mane Gevorgyan.

Everything would be fine, however, just a couple of hours later, the  state of joy of waiting in society was replaced by anger and apathy.  It turned out that the plane landed at the capital's Erebuni airfield  without prisoners of war. Parents waiting for their children at the  airfield threatened to join the parents of the missing servicemen,  who blocked the entrances and exits from the building of the Armenian  Defense Ministry since the morning of April 8.

And here there is a quite logical question why, what is the purpose  of the persons from the ruling retinue who have replicated this  information? Is it the result of incompetence and irresponsibility,  or is it a lack of awareness, or is it all purposeful actions that  pursue populist goals, or, what I don't want to believe, all this  "part of a game?" After all, the above-mentioned persons simply  cannot fail to understand the sensitivity of this issue for the  Armenian society, which for 5 months has not been able to get out of  the deep shock in which it found itself as a result of the autumn war  in Karabakh.

Against the background of the scandal with the empty plane, the  statement of the office of the Deputy Prime Minister of Armenia  Tigran Avinyan that the return of the Armenian prisoners of war is  unfortunately postponed again, because the 8th point of the  trilateral statement of November 9 is not being implemented by the  enemy, which is a gross violation of the post-war humanitarian  process. "The negotiations continue with the mediation of the Russian  side, and we hope that the Azerbaijani side will eventually respect  the signed statement and implement the humanitarian agreement,  thereby contributing to the establishment of stability in the  region," Avinyan's office said.

And here it seems that the Armenian authorities are doing everything  as in the famous Russian proverb "The head does not know what the  hands are doing". Some make statements that are unclear for what  purpose, others are then forced to justify themselves and try to  "pull the brakes".  The position of the Azerbaijani side also came to  this statement, as if by order. Thus, Azerbaijani Foreign Minister  Jeyhun Bayramov at a joint press conference with the Secretary  General of the OIC, Yousif bin Ahmed al - Osaimin, assured that the  essence of the topic of prisoners of war presented by Armenia is  different and the Azerbaijani side has returned all the prisoners of  war to Armenia - more than 70 people.  At the same time, he added  that 62 volunteers detained by the Azerbaijani Armed Forces in  December 2020 are "terrorists", and a criminal case has been opened  against them and they will be convicted under the laws of the  Republic of Azerbaijan, and this issue is closed for the Azerbaijani  side.  But, for some reason, Bayramov did not mention that there are  more than 62 Armenian prisoners of war in Azerbaijan. After all, only  according to the confirmed data of the RA delegation to the ECHR,  Azerbaijan continues to illegally hold about 200 prisoners of war and  civilians, but human rights activists tend to believe that this  number can reach up to 300-400 people.

And if it is still clear what the Azerbaijani side is trying to  achieve from Russia, speculating and actually blackmailing it with  this issue, it is not yet clear what the Armenian authorities are  trying to achieve.  After all, it is quite logical that various  speculations on this issue undermine the Russian authority in the  region. In fact, this demonstrates the impotence of the Russian side  to achieve breakthrough solutions on this issue, against the  background of the responsibility that it assumed within the framework  of the trilateral document.

And the pro-Western forces operating in Armenia are only waiting for  such " shoals "to once again throw a stone into the"Russian garden".  The question arises, why would the Armenian authorities compromise  their ally with such hasty actions?

It is also unclear why Armenia did not provide guarantees for the  return of its prisoners of war. The Armenian authorities could not  have failed to know that the return of two saboteurs Dilgam Askerov  and Shahbaz Guliyev, who were sentenced to long terms in  Nagorno-Karabakh, including for the murder of an imperfect person in  the Karvachar region, was essential for the Azerbaijani leadership.  The question arises as to why the above-mentioned persons were the  first to be transferred to Azerbaijan within the framework of the  trilateral agreement. Why, the Armenian authorities did not leave  them as "hostages" to guarantee the return of all Armenians held by  the Azerbaijani side. Or if Baku insisted on their immediate return,  why didn't Yerevan insist on handing over one saboteur at the  beginning of the process, and returning the second one only after all  the prisoners held in Azerbaijan were repatriated?

An important issue in this context is the completely unjustified  consent of the Armenian side to the work of the so-called joint  commission, designed to work out the issue of opening communications.  What kind of cooperation on one of the points of the agreement can we  even talk about if the opposite side completely ignores such an  important other point about the exchange of "all for all", a point  that is certainly fundamental in the context of creating in the  region, although fragile, but an atmosphere of mutual trust, without  which, no cooperation can be talked about. Without a policy of  linking these two points, there can be no prospects for a  conversation with the dynastic regime of Aliyev, with the regime that  invited international terrorist structures to war with the Karabakh  people.

And it is not clear why information about the process of returning  prisoners of war should come through Facebook from some unauthorized  short-sighted deputies who think they are big politicians who stick  their noses in their own affairs, when there is a Foreign Ministry,  the Ministry of Defense, the National Security Service? Or is  Facebook actually becoming the main platform for government  management!?  And while we are in search of solutions to all these  numerous indigestible questions for a normal healthy mind and watch  the next speculations on this issue, the parents of prisoners of war  and prisoners of war are quietly going mad from the hopelessness in  which they found themselves. They continue to hit the doorsteps of  government agencies and the Russian Embassy in Armenia.