Parliamentarian: Armenia is not going to refuse to recognize the  Genocide 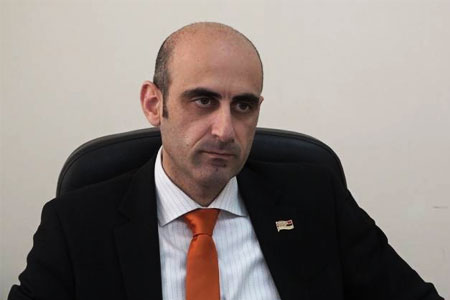 ArmInfo.Armenia is not going to abandon the agenda of international recognition of the fact of the Armenian Genocide in Ottoman Turkey in any way. A similar opinion was  expressed by ArmInfo deputy of the parliamentary faction "My Step"  Narek Zeynalyan.  "There is simply no such issue on our agenda.

However, this does not mean that Armenia does not feel the need to  normalize relations with its neighboring country. We must understand  the complexity of the development of a "closed" country. And here it  should be noted that Turkey has never put the issue of Genocide as a  precondition for establishing diplomatic relations with Armenia," he  said.

According to Zeynalyan, Ankara has always put forward only the  Artsakh problem as the only precondition for opening the borders with  Armenia and establishing diplomatic relations. According to him,  despite the fact that the problem of Artsakh is still far from a  final solution, in a certain sense, we can still talk about a  solution today.

In this light, the parliamentarian highlighted the unresolved  situation, the lack of realization of the right of the people of  Artsakh to self-determination, the issue of independence of Artsakh.   At the same time, the settlement process itself, in his opinion, is  moving forward. In particular, in the direction of unblocking  regional communications. "In other words, certain actions in this  direction are already being implemented. And in parallel, we need to  try to go in the direction of forming normal relations with our other  neighbors, " he said.

"Let's clearly share the essence of our proposals and not present  what some circles want for real. We do not offer Turkey friendly  relations in any way. We only propose the normalization of these  relations. And we hope that we will be able to form relations that  will allow us to open the Armenian-Turkish border. Then live in the  same region as normal neighbors. Time will tell whether our hopes  rwill be fulfilled, " Zeynalyan concluded.