The European Commission condemned the attack of Azerbaijanis on the  Cathedral of St. Ghazanchetsots in Shushi during the hostilities 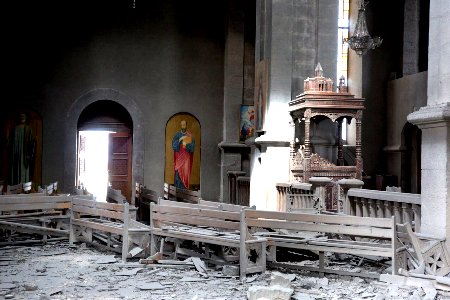 ArmInfo. The European Commission condemns the attacks of Azerbaijanis on the Cathedral of Holy Christ the All-Savior Kazanchetsots in Shushi during the  hostilities in the fall of 2020. ArmInfo was informed about this in  the press service of the Hay Dat European Bureau.

“In addition, in his response, the EU High Representative refers to  UN Security Council Resolution 2347 (2017), which defines war crimes  against religious, educational and cultural centers. The European  Commission also welcomes the UNESCO-initiated mission to visit  Nagorno-Karabakh and the territories , which are currently controlled  by Azerbaijan, in order to conduct the first actual assessment of the  Armenian cultural heritage. This will also contribute to the  preservation and restoration of cultural sites, "the message says.

EAFJD President Kaspar Karampetyan stressed that Azerbaijan should  bear full responsibility for the horrific war crimes committed during  and after the 2020 war in Nagorno-Karabakh, including attacks on  civilian settlements, as well as religious sites, including the  Kazanchetsots Cathedral in Shushi.  "Shushi was undoubtedly a  historical Armenian city, an important center of culture and  education and a symbol of the Armenian revival of Artsakh. The  international community and relevant organizations must closely  monitor and control the preservation of the Armenian religious and  cultural heritage in the region. We must not allow another act of  cultural genocide. such as the destruction of thousands of Armenian  medieval khachkars in Nakhichevan by the Azerbaijani authorities in  2006. Any attempts to destroy the historical Armenian presence must  be prevented and resolutely condemned, "summed up Karampetian.   Recall that on October 8, 2020, the Cathedral of Holy Christ the  All-Savior in Shushi was twice fired upon by the Azerbaijani Armed  Forces. As a result of the second shelling, three Russians were  injured - Yuri Kotenok, Levon Arzanov and a member of the  accompanying group Hrant Baladyan, who arrived at the scene to cover  the consequences of the bombing of the same temple in the morning.