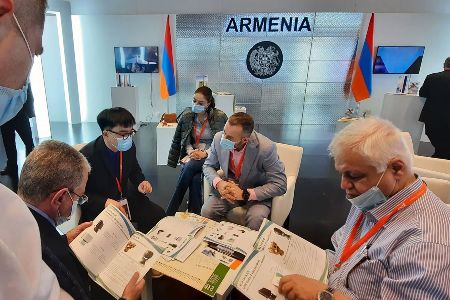 ArmInfo. The Ministry of  High-Tech Industry (HTI) of Armenia made an explanation due to the  scandal that broke out around the participation of the Armenian side  in the International Defense Conference & Exhibition in the capital  of the United Arab Emirates - Abu Dhabi from February 21 to 25.

It should be noted that a scandal erupted the day before due to the  fact that the pavilion of Armenia at the exhibition was empty and   instead of the samples of weapons of the Armenian   military-industrial complex, only booklets were presented in the  pavilions. As it turned out, due to the careless organization of the  delivery of Armenian defense products to the exhibition, the cargo  was still stuck in Moscow for unknown reasons and was not delivered  to Abu Dhabi on time. Against the backdrop of the outbreak of the  scandal and in view of the fact that the state allocated considerable  funds to participate in the exhibition, the Ministry was forced to  make excuses.

So, in the statement of the department, in particular, it says:   "Regarding the participation of Armenia in the international  military-industrial exhibition IDEX-2021, in particular, the absence  of exhibits in the pavilion of Armenian companies, we inform you that   the delivery of exhibits was organized in advance, with the  expectation that they will be in place. on time, before the opening  of the exhibition.

Due to logistical problems, samples of Armenian military equipment  did not reach Abu Dhabi. To clarify the circumstances of the  incident, by order of the minister, an official investigation is  carried out.  Despite the problem that has arisen, Armenian companies  work effectively at the exhibition to present their products with  dignity. They establish contacts with international partners,  discover new opportunities and sales markets, study international  experience in the field of military equipment. " As ArmInfo  previously reported, by the decision of RA Prime Minister Nikol  Pashinyan, the Armenian delegation headed by the Minister of  High-Tech Industry Hakob Arshakyan is taking part in the  International Defense Conference & Exhibition in Abu Dhabi.

By the decision of the Prime Minister, the expenses for the trip of  the delegation were made at the expense of the funds provided by the  state budget of the RA for 2021 for business trips abroad. It was  noted that the daily expenses of the Armenian delegation will be  covered by the inviting party. The Minister of High-Tech Industry is  instructed to submit a report on the results of a business trip to  the UAE to the RA Ministry of Foreign Affairs within three days after  returning from a business trip.  Note that the International Defense  Conference & Exhibition, or IDEX 2021 for short, will be held from  February 21 to 25 in the capital of the UAE, Abu Dhabi.

The exhibition is dedicated to technologies for ensuring public and  state security. The demonstration of samples of weapons, including  wheeled and tracked vehicles, will continue this time as well.  The  theme of the exhibition is very relevant, it emphasizes the need for  integration and cooperation in anti-defense technologies. It is a  unique platform for building and strengthening relationships with   government departments, businesses and the military, and attracted   1,200 exhibiting companies and over 100,000 visitors in 2019. This  year, IDEX 2021 will traditionally be held in conjunction with the  navy exhibition.

Notably, according to a press release issued by IDEX, the first ever  IDEX event will feature the Israel Pavilion, which will be attended  by over 30 defense and security companies.