The presentation of "Ereruyk `` book by Patrick Donabedian took place 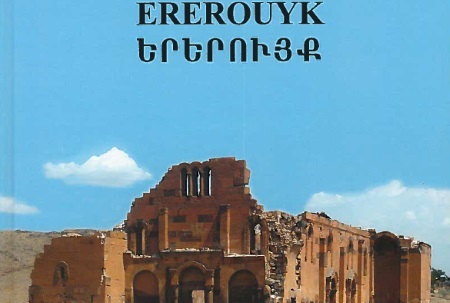 ArmInfo. The French Embassy  in Armenia has supported the publication of Patrick Donabedian's book  "Ereruyk" in two languages - Armenian and French. The book, as  reported by the French Embassy in the RA, presents the early  Christian medieval complex "Ereruyk", known for its famous basilica  near the ruins of Ani. It is one of the most impressive and  mysterious monuments in Armenia.

Patrick Donabedian's work is based on the research carried out by the  French-Armenian archaeological expedition in Ereruyk in 2009-2016,  which was carried out under the guidance of the author of the book in  cooperation with the Institute of Archeology and Ethnography of the  National Academy of Sciences of the Republic of Armenia, the  Geological Museum and the University of Aix-Marseille (France). The  French Ministry of Foreign Affairs has supported the French-Armenian  archaeological mission, which has a history of over 20 years.

The publication of the book also aims to promote the conservation of  the site, promote its inclusion in the UNESCO World Heritage List and  establish a tourism center in the nearby village Anipemza.