Vahagn Hovakimyan: We are discussing the possibility of presenting a  legislative initiative on the self- dissolution of parliament 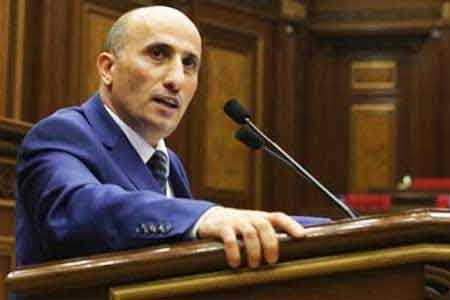 ArmInfo. MP from the "My Step" faction Vahagn Hovakimyan said that the ruling bloc is discussing the idea of dissolving the parliament. Hovakimyan stated this in an  interview with reporters.

The MP noted that in full composition, however, the faction has not  yet discussed this issue, and there is no decision on this issue.   Hovakimyan did not rule out that after discussion the faction might  give a negative opinion on this issue. At the same time, the MP  confirmed that the idea belongs to the representatives of the "My  Step" bloc.

"In fact, this idea is not new, we discussed it when we intended to  amend the Constitution. I myself also considered a similar  possibility. So far, I do not want to provide additional details in  connection with this initiative, since the faction has no decision  regarding it yet, "Hovakimyan said.  The MP also assured the  journalists that this initiative of the bloc is not connected with  the fact that Armenian Prime Minister Nikol Pashinyan does not want  to resign.

To note, for the dissolution of parliament, it is necessary that the  legislature does not elect a prime minister twice.  If the parliament  does not twice elect the head of the Cabinet, then the National  Assembly is dissolved. After that, early parliamentary elections are  organized. However, Armenian Prime Minister Nikol Pashinyan does not  want to resign.