The bodies of four more dead servicemen found in Karabakh 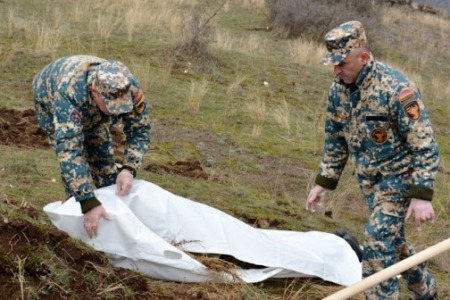 ArmInfo. As a result of search and rescue operations, the bodies of four more dead servicemen were found the day before. On this January 26, corr. Head of the  public relations department of the State Emergency Service of  Karabakh Hunan Tadevosyan told ArmInfo.

According to him, the body of one of the servicemen was found in the  Matagis area, he had a driver's license, it turned out to be a  reservist Khachatryan Ashot Levonovich, born in 1993. His remains  were transferred by the Azerbaijani side. The bodies of the other  three servicemen were found in the Jabrail area.  To find out their  identities, a forensic medical examination was appointed.

Today prospecting work will continue in two groups in the direction  of Gadrut.

In general, as the head of the department noted, since November 13,  2020, the bodies of 1287 people have been found in the zone of the  Karabakh conflict.