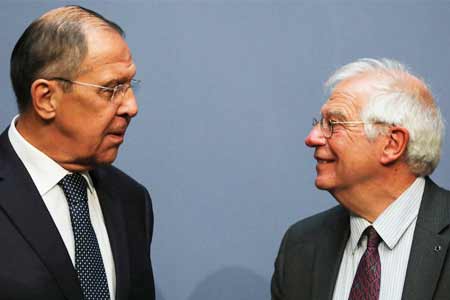 ArmInfo. EU High Representative for Foreign Affairs and Security Policy Josep Borrell will pay a working visit to Moscow on February 4-6. This was reported  by the press service of the Russian Foreign Ministry.

The ministry noted that Borrell's meeting with Russian Foreign  Minister Sergey Lavrov will take place on February 5. The parties  will discuss a set of problems and prospects for relations between  Brussels and Moscow.

"An extensive exchange of views is also planned on topical issues on  the international agenda, including the situation in the Western  Balkans, the Middle East and North Africa, in the CIS. The prospects  for the implementation of the Joint Comprehensive Action Plan to  resolve the situation around the Iranian nuclear program, further  stabilize the situation in Nagorno-Karabakh, security issues in  Europe and other topics of mutual interest will be discussed, '' the  press service of the Russian Foreign Ministry noted.

In addition, the topic for discussion will be the prospects for the  implementation of the Joint Comprehensive Action Plan to resolve the  situation around the Iranian nuclear program, further stabilization  of the situation in Nagorno-Karabakh and security in the EU, as well  as other issues of mutual interests.

AFP reported earlier that Borrell plans to visit Moscow. Sources of  the agency in diplomatic circles noted that the topic of the upcoming  talks will be the issue of sanctions. The day before, Borrell also  confirmed his upcoming visit to Moscow.