PACE Secretary General: Council of Europe is negotiating with Armenia  and Azerbaijan on post-conflict assistance in order to ensure respect  for human rights 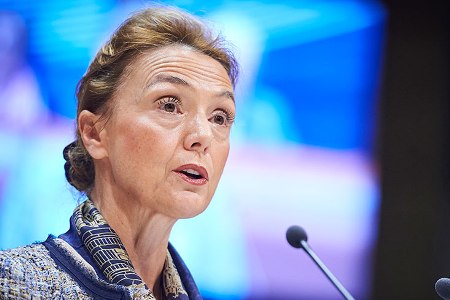 ArmInfo.The Council of Europe is negotiating with Armenia and Azerbaijan on post-conflict assistance to ensure respect for human rights. This was stated by the  PACE Secretary General Maria Peichinovich Buric during her speech at  the session of the Parliamentary Assembly held in a hybrid format.

According to a report published on the PACE website, Buric, referring  to the November conflict between Armenia and Azerbaijan, noted the  ceasefire with satisfaction.

According to the Secretary General, the implementation by member  states of judgments of the European Court of Human Rights is not a  "kind request", but a "legally enforceable requirement". Referring to  the Osman Kavala case, she noted that it was "completely wrong" that  the Turkish authorities had still not released him, despite the fact  that the Court had demanded his release last year in its final  ruling.

The Secretary General also expressed sympathy for the large number of  human victims of the COVID-19 pandemic. Her thoughts were also  directed to those who had lost their jobs. She stressed the  importance of preserving the core values of the Council of Europe  during the crisis, especially respect for human rights and equal  treatment of all people, regardless of their financial situation.

Despite the unprecedented problems associated with the pandemic, the  Council of Europe was able to successfully continue its regular work,  said Maria Pejcinovic Buric. In particular, she highlighted the  progress made in relation to the human rights aspects of the use of  artificial intelligence and environmental protection, as well as in  the fight against human trafficking and the promotion of the Istanbul  Convention, which aims to protect women from all forms of violence.