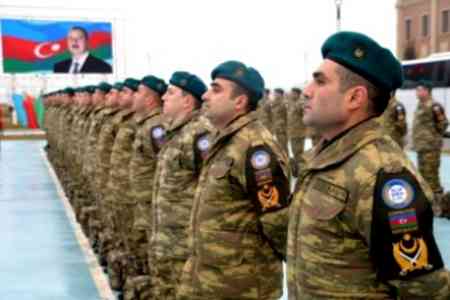 ArmInfo. The cessation of  hostile actions against Armenia may create conditions for building  trust in the region. This is stated in the commentary by press  secretary of the RA MFA Anna Naghdalyan in connection with the  statement made by the head of the Turkish Foreign Ministry a few days  ago about the readiness of Ankara and Baku to normalize relations  with Yerevan.

"I would not like to comment on the statements of Turkish-Azerbaijani  leadership, which are not consolidated by any action. Moreover, they  contradict each other. The Turkish-Azerbaijani military exercises  carried out near the Armenian border in violation of relevant OSCE  commitments do not prove that the Turkish-Azerbaijani leadership has  peaceful intentions towards Armenia. The cessation of hostile actions  against Armenia may create conditions for building trust in the  region", stated the representative of the Armenian Foreign Ministry.

The Turkish Ministry of National Defense reported that Turkey and  Azerbaijan are preparing for the winter military exercises, which  will be held near the borders of Armenia from February 1 to Feb.12.  In this regard, on January 17 Azerbaijani servicemen arrived in  Turkey to take part in these maneuvers, called "Winter- 2021". The  exercises will be held in the area of the city of Kars, which  previously belonged to the Russian Empire, and today is located 80  kilometers from the border with Armenia. During the Winter 2021  exercise they will practice the landing of tactical airborne assault  forces and the delivery of air strikes. Special forces, tankers,  gunners, snipers and helicopter pilots will be involved in the  maneuvers.