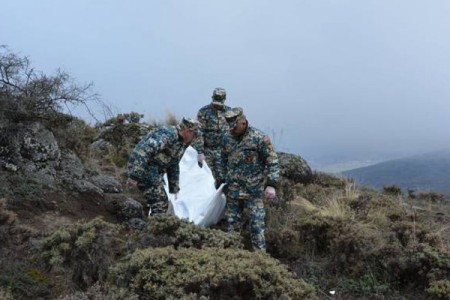 ArmInfo.  During the search  work in Karabakh, the bodies of four more people were found, three of  them were civilians and one was a serviceman. ArmInfo was informed  about this by Hunan Tadevosyan, Head of the Public Relations  Department of the State Service for Emergency Situations of Karabakh.

According to him, the identities of three civilians have been  established - this is Marina Hayrapetyan, a resident of the Drakhtik  village of the Hadrut region, the other two are Serzhik Avagyan and  Yurik Arushanyan, residents of the Azoz village of the same district.  Their bodies were found in the courtyards of their homes. A forensic  examination was appointed to find out the causes of death.

According to Tadevosyan, the remains of the serviceman were found in  Jabrail, the identity has not yet been established, but according to  preliminary information he was a volunteer.

The search will continue today - one detachment will work in Fizuli  and Kubatlu, two more detachments - south of Berdzor, in Ishkhanadzor  and Aygehovit.

Tadevosyan also noted that in general, since November 13, the bodies  and remains of 1251 people have been found.