Arman Abovyan: Nikol Pashinyan and the ruling faction are unable to  resolve the issue of returning prisoners of war. 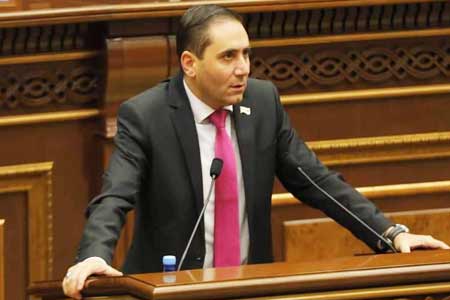 ArmInfo.Nikol Pashinyan and the ruling faction are unable to resolve the issue of returning prisoners of war to their homeland. Secretary of the Prosperous Armenia faction Arman Abovyan stated this from the rostrum of the parliament. The MP  said that the opposition will not back down from its demand for the  resignation of the government and the dissolution of parliament.

"There are more than 60 issues on the parliament's agenda, which  concern anything other than the situation in the country. Neither  you, nor your leadership think about the future of Armenia. Do you  think someone other than you is interested in early elections? No. As  long as we have prisoners, your elections are not interesting to  anyone, "the deputy noted. Abovyan stressed that now the number one  issue is the return of prisoners and it is not clear to him why our  parliament behaves like the leadership of a European country, while  there are a number of unresolved problems in Armenia. "We will not be  silent, we will talk about these problems every day until they find a  solution. Enough, time to resign, "said Abovyan.