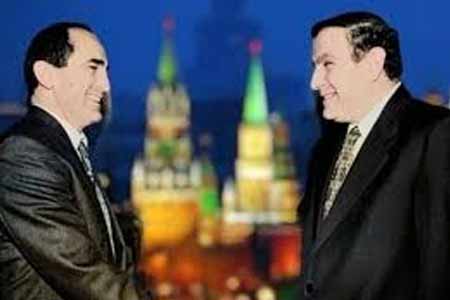 ArmInfo. The offices of the first and second presidents of Armenia reacted harshly to today's statements by RA Prime Minister Nikol Pashinyan regarding the  canceled visit of ex-presidents Levon Ter-Petrosyan and Robert  Kocharian to Moscow.

Thus, the press secretary of the first president of Armenia Levon  Ter-Petrosyan Arman Musinyan, when asked by journalists to comment on  Pashinyan's statements on his Facebook page, in particular wrote:   "Levon Ter-Petrosyan considers it senseless to comment on the mental  convulsions of the one who destroys the nation. Anyway, he has no way  to justify himself. The Armenian people will never forgive him. "

In turn,  head of the office of second president Robert Kocharyan,  Viktor Soghomonyan, noted that after Pashinyan's publication, he  thought about answering or not.  "But in connection with Pashinyan's  recording, I remembered a story. So, one person asks a friend: is it  true that our neighbor won a car in the lottery? He replies:  "Almost". But not a neighbor, but his brother, and not in the  lottery, but in a casino, and not a car, but an apartment, and did  not win, but lost. Lies and falsifications are inseparable from  Nikol, "Soghomonyan wrote.  Today, RA Prime Minister Pashinyan  presented his version of the failed visit of Kocharyan and Ter-  Petrosyan to Moscow. He said that the Second and Third Presidents of  Karabakh Arkady Ghukasyan and Bako Sahakyan on October 20 proposed to  organize a meeting of the current and former leaders of Armenia and  the NKR, which would become an expression of national unity during  the war.

"After some discussions, I agreed. Arkady Ghukasyan and Bako Sahakyan  at our next meeting said that there is one subtlety in this idea.  Levon Ter-Petrosyan and Robert Kochariyn want to visit  Moscow, hold  summit meetings there, and our meeting will be organized after their  return, it will become a kind of exchange of information, a more  meaningful discussion of the situation. I said that I do not mind. I  will even provide a government plane, let them go, meet and return.  However, after my consent, the former presidents of Karabakh raised  another issue. They said, that I need to act as a mediator for  Russian President Vladimir Putin to accept Ter-Petrosyan and  Kocharyan as special envoys.

I answered the following. I am in constant contact with the President  of Russia. There are days when I talk to him on the phone five or six  times. He will ask me what they should talk to him about, Why can't I  tell him directly that I have to say it through special envoys? What  should I answer him?

I suggested another option. Ter-Petrosyan and Kocharyan will make an  official visit to Moscow as retired presidents, where they will be  guests of former Russian President Dmitry Medvedev, who is also  Deputy Chairman of the Russian Security Council, and will try to  organize courtesy meetings with the Russian President, Foreign  Ministry and other high-ranking officials.  Arkady Ghukasyan and Bako  Sahakyan left, promising to discuss this option with Ter-Petrosyan  and Kocharyan. It turned out that the option I proposed did not  really interest the latter.  In that case, what do they want from me?

They have already agreed to go to Moscow and meet with him.  Then it  turned out that the case was in Kocharyan's passport, which is in  court. I said let them go to court, I will ask the prosecutor's  office not to object to the return of the passport. And so it  happened. The court returned the passport to Kocharyan, but  Ter-Petrosyan and Kocharyan did not fly to Moscow. "

It is also worth emphasizing that the Deputy Chairman of the Armenian  National Congress Levon Zurabyan previously stated that Pashinyan  never gave the ex-presidents a mandate to negotiate.  On October 30  it became known that the first and second presidents of Armenia,  Levon Ter-Petrosyan and Robert Kocharyan, are planning to go to  Moscow to discuss the situation in Nagorno-Karabakh. On the same  evening, it was reported that the visit would not take place due to  the fact that Kocharyan infected with the coronavirus.