Hrant Tokhatyan: I have some information that Azerbaijanis are  selling our prisoners of war 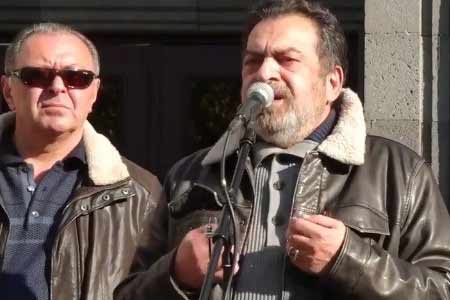 ArmInfo. During the rally of the creative intelligentsia, actor Hrant Tokhatyan invited all Armenians of the world to write letters to the governments of their countries,  human rights defenders, the Red Cross, the UN to all organizations  that have at least a small opportunity to put pressure on official  Baku to return prisoners of war and the bodies of dead soldiers to  Armenia.

"I have some information, it is still unconfirmed, but this practice  was used by Azerbaijan during the first Artsakh war. The AR  authorities are selling our prisoners of war, this is the worst thing  that can happen to them. Please, let's all raise our voice together,  let's save our soldiers, "Tokhatyan emphasized.  Producer Armen  Grigoryan noted that he proposes to hold a march tomorrow, similar to  the  "Memorial March". He proposed to hold a march near the Opera  tomorrow at 12 noon, in which the citizens of Armenia will take part.

"Take with you all the servicemen who have gone missing and taken  prisoner. Let's walk through the buildings of all the embassies,  along the streets of the capital of Armenia, Yerevan. Let's raise our  voice," Grigoryan said.

Director, producer from Gyumri Ruben Mkhitaryan said that he would  also join the march tomorrow. "I will ask my friends, who were  planning to hold a protest action in Gyumri tomorrow, to come to  Yerevan.  Since all the embassies are located in Yerevan. There are  several key embassies that we must visit. We need to support the  parents of the missing servicemen, they must understand that they are  not left alone with the government.

We can not save our servicemen with our posts, enough for us to be  silent, enough to give Azerbaijan the opportunity to turn everything  that happens into a show. Let's not go to work. Let us consistently  go to all the embassies, convey our voice to the representatives of  the leading countries, who will be able to take active steps and  return our servicemen, "Mkhitaryan concluded.