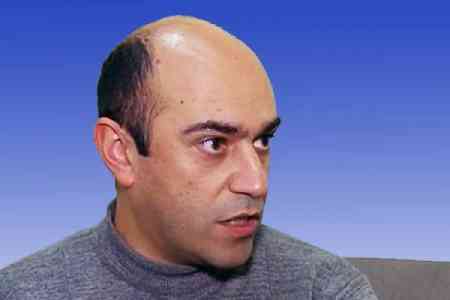 ArmInfo.As a result of the 44-day war, it must be stated that Israel has become one of the interested centers of power in "inviting" Turkey to the South  Caucasus, and more precisely to Azerbaijan. An independent analyst  Saro Saroyan expressed this opinion to ArmInfo.

"The invitation was conditioned by Tel Aviv's desire to distract  Turkey from the Eastern Mediterranean. It is no secret that Erdogan  has been pursuing a very aggressive policy in this region recently.  Meanwhile, Israel considers the Eastern Mediterranean to be a zone of  its own strategic interests. And strives for monopoly influence in  this zone. ", - he thinks.

That is why Israel, according to the analyst, has made considerable  efforts to promote the Azerbaijani- Turkish victory in the war  against Armenia. Moreover, by no means only the supply of arms to  Azerbaijan.  The intelligence and political assistance provided were  essential. All of this was aimed at giving Turkey additional  confidence in the process of countering Russian influence in the  South Caucasus.

According to the analyst, in order for Turkey to appear in the zone  of Russian influence, guarantees of certain military-political actors  in their assistance to its daring initiatives were naturally  necessary. From this point of view, Israel had an enormous  contribution to the outbreak of the 44-day war. As a result, enormous  efforts were required from the Kremlin to prevent direct involvement  of Russia in hostilities, since there they realized the disastrous  consequences of such a scenario, both for themselves and for Turkey.  Thus, it seems that a major regional war was avoided. In reality,  Erdogan managed to win this battle on the path of building a  neo-Ottoman sultanate.

"And we should not expect that he will be satisfied with this.  Especially considering that Israel's assistance in penetrating into  the zone of Russian influence allows Ankara to consider its rear  protected and initiate a breakthrough to new positions in the Black  Sea region. The Kremlin has already demonstrated toothlessness, and  Israel is interested Accordingly, the answer to the question of why  Erdogan should stop in such a situation does not contain any reasons  for a logically justified refutation, "the analyst concluded.