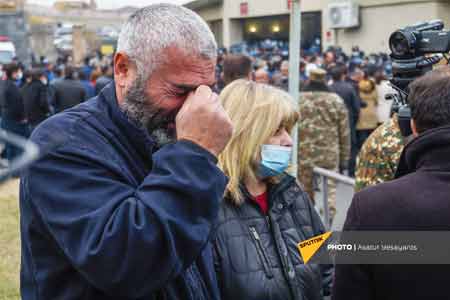 ArmInfo.Relatives of missing servicemen are protesting in front of the Armenian Ministry of Defense.

As an ArmInfo correspondent reports, the protesters stated that they  want to meet with  former Defense Minister David Tonoyan, who should   answer their questions. In particular, they want to receive  information about what happened to the servicemen who missed in the  regions that came under the control of Azerbaijan.

MP, Head of the Parliamentary Standing Committee on Defense and  Security Andranik Kocharyan came out to the protesters. The MP said  that all these issues will be discussed in the government today.

"I suggest you choose 15-20 people tomorrow and meet in the National  Assembly. The Ministers of Defense and the Ministry of Emergency  Situations of Armenia will also be present at the meeting. We will  discuss further steps and present you the results of today's  discussion in the government," the MP suggested. Kocharyan also noted  that this issue will also be discussed with the Russian leadership.