Armen Darbinian: It is necessary to create an Armenian success story.  The history of the collapse is not interesting to the world 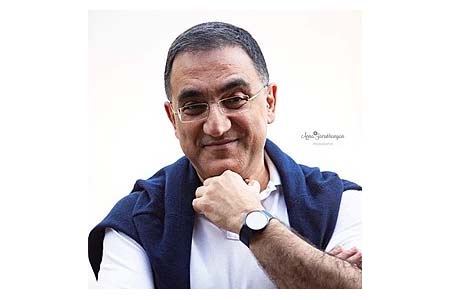 ArmInfo.The main thing that we have lost in the 44 day war is dignity. It needs to be restored - this is our main task. Rector of the Armenian-Russian (Slavonic)  University, ex-prime minister of Armenia, professor Armen Darbinyan  expressed a similar opinion in an interview with the RAU studio.

"And this is due not only to the military, but also to the diplomatic  processes, the quality with which the state of Armenia, the Armenian  people acted in all these discussions and lost. The second result of  the war is the actual collapse of the concept of development of  victorious Armenia and Artsakh, which we were guided by during the  last 29. The conclusion is that everything must be started from  scratch, "he stressed.  Darbinyan described the current situation in  Armenia as a national, by no means only a political crisis - 10  million Armenians of the world must understand how to live now,  determine their further life priorities. He considers the  construction of a new, powerful Armenia by increasing efforts in this  direction as such a natural priority for the coming decades.

The deep reasons for the defeat, in his opinion, appeared long ago -  the 44-day war only recorded the bankruptcy of the ideology, ideas,  concepts underlying the development of Armenia and Artsakh over the  past 29 years. And the responsibility for this defeat is borne by the  entire society, since it was the society that elected the power.  Responsibility for a frivolous attitude towards the situation,  underestimation of Azerbaijan, myths, self-deception, unsubstantiated  hopes for external forces, etc.  "Both the previous and current  authorities, society realized the inevitability of war, saw that  Azerbaijan was arming itself, but reacted to this prospect extremely  irresponsibly. Accordingly, they were not ready for this war. All  this surfaced at the cost of huge, asymmetric for the Armenian  people, In this light, society needs to find the strength to get out  of the current collapse. There is simply no other way, "he said.  The  professor assesses the signing of the statement of November 9 as an  inevitable, uncontested, right step.  Unlike his previous actions.  Accordingly, all his predecessors and Armenian society share  responsibility for the situation that led to the last war with  Pashinyan. "I don't believe that Pashinyan is a traitor, I don't want  to believe in the accusations made against him. Everyone knew about  the impending war, including Serzh Sargsyan. We need to be honest,"  he stressed.

The professor links the solution to the political crisis with the  resignation of Prime Minister Pashinyan. But by no means  instantaneous, as is required today on the square - Pashinyan quite  rightly considers it his mission to provide the necessary conditions  for the exercise of power by the people. In this light, Pashinyan  cannot simply take and leave now, but he is obliged to announce his  resignation, clear ways and terms for the transfer of power, and  early elections. He is simply not capable of providing stability on  his own, but he is quite capable of becoming a guarantor of the  transfer of power.

In general, Darbinyan does not expect anything good from the early  elections in the absence of a political field in Armenia, considering  it an exclusively forced measure. At the same time, Armenian  President Armen Sarkisian, in his opinion, can do much more for the  country than he does, or pretends to do, at least at the level of  statements. "Azerbaijan acquired a huge amount of weapons and hired  international terrorists for the war with Armenia using oil and gas  money received from foreign companies. Accordingly, one way or  another, they took part in the involvement of terrorists in the war.  And someone should talk about this within the framework of their own  constitutional powers ", - he stressed.

According to Darbinian, the Armenian authorities have been destroying  and distorting the country's political field for decades,  deliberately preventing the emergence of ideological political  forces. As a result, quasi-parliaments were filled with  quasi-parties. Such destruction of an adequate political system was  beneficial to the current government, to the presidents, but not to  the country, which led to its weakening and the absence of a  political system capable of resolving the current political crisis.  Accordingly, the political field, like everything else, has to be  created from scratch.

"Consolidation of society should take place around creativity, not  slogans for revenge. This is a road to nowhere. Our diaspora never  believed and does not trust the Armenian authorities. And the  situation can only be changed by consolidating our internal efforts  towards building a powerful state in Armenia itself.  Only after The  Diaspora will be able to really come to Armenia. We must finally  create our own success story. The stories of collapse are not  interesting to the world. And we have both the potential and all the  necessary opportunities for this, "Darbinian summed up.