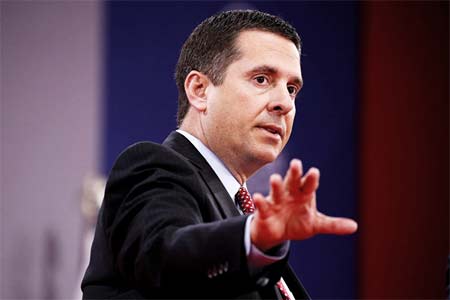 ArmInfo.The head of the intelligence committee of the US House of Representatives, Republican Devin Nunez, has called on the Trump administration to block all US  arms sales to Turkey and suspend military aid to Azerbaijan. ArmInfo  was informed about this by the Armenian National Committee of America  (ANCA).

In a letter to Assistant Secretary of State Clark Cooper, who  oversees issues such as military aid, arms sales and arms export  controls, Congressman Nunez asked for an announcement that the US  government "will block any new, pending or pending contracts for the  sale or transfer of technology or equipment. military or dual use to  Turkey or any other country that may transfer them by third parties  to the government of Azerbaijan. "

ANCA Chairman Raffi Hambaryan announced his intention to work with  Congressman Nunez to ensure that the Department of State immediately  takes appropriate action related to the sale of US military equipment  to Turkey and Azerbaijan, including sophisticated drone parts.

The ANCA - in addition to backing Congressman Nunes' calls for an end  to arms sales to Ankara and military aid to Baku - is calling on the  administration to immediately withdraw its waiver of section 907 of  the Freedom Support Act, and Congress to revoke the White House's  powers to suspend the full application of that law.

ANCA also calls on the administration to enact global Magnitsky  sanctions against senior leaders of the Erdogan government in Turkey  and the Aliyev government in Azerbaijan, based on their  responsibility for serious human rights violations during  Azerbaijan's aggression against Artsakh. IN ANCA also recalled that  thanks to their efforts, a number of American companies have stopped  or suspended the supply of components to Turkey. These firms include  Garmin, Xilinx, Trimble, Beringer and ViaSat.

Amendment 907 was adopted by Congress in 1992 and prohibited the US  administration from providing government assistance to Baku in  connection with the conflict between Azerbaijan and Armenia. For many  years, Azerbaijani diplomacy has been striving to abolish the 907th  amendment.

As ArmInfo previously reported, during his visit to Yerevan in 2018,  the then US President's National Security Advisor John Bolton, did  not rule out the cancellation of Amendment 907 by President Donald  Trump and the sale of weapons to Azerbaijan. Suspension decision  action has not yet been taken, and I cannot predict what it will be  in terms of increasing the sale of weapons. But the situation is such  that Armenia purchases most of its weapons from Russia, Azerbaijan  also purchases more than 80% from the Russian Federation. This  circumstance, of course, does not contribute to the settlement of the  Nagorno- Karabakh conflict, "Bolton said then. And already in 2019,  the Trump administration suspended the implementation of this  amendment. This year, its non-implementation was extended for another  year.