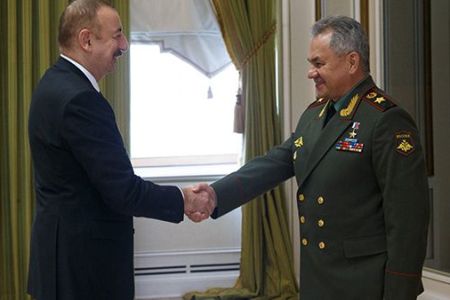 According to RIA Novosti, the parties discussed the implementation of  the statement on the settlement in Nagorno-Karabakh.

"At a meeting with Shoigu, Aliyev highly appreciated the progress in  the implementation of the trilateral statement on Karabakh and the  actions of the Russian peacekeepers," the news agency notes.

"The ceasefire in Nagorno-Karabakh is being observed. I am sure it  will continue in the future, "Sergey Shoigu said during a meeting  with Aliyev.

It is also reported that a Russian inter-departmental delegation,  headed by Russian Foreign Minister Sergey Lavrov, has arrived in  Baku.

Before Baku, the inter-departmental delegation of the Russian  Federation visited Yerevan and met with the leadership of Armenia.  The purpose of the visit is to discuss the situation in the zone of  the Karabakh conflict, to resolve the humanitarian crisis in Artsakh,  as well as to consider the entire range of issues in bilateral  relations.