Sociologist: Saving a nation in people who are not going to make a  choice between the present and the former 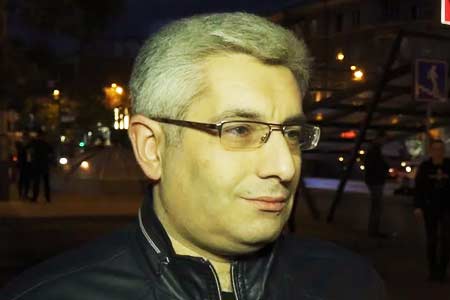 ArmInfo.The Armenian society was divided into supporters, striving for power "former" and supporters of the current power. Against this background, the  resignation of the prime minister is not even demanded by people, but  by reality. Therefore, sooner or later, it will happen. Sociologist  Karen Sargsyan expressed this opinion to ArmInfo.

"I am convinced that in the current realities no one, not a single  political force in Armenia is legitimate.  However, in any case, the  resignation of the government should take place within the framework  of the Constitution and in no way by means of gathering people in the  squares. Now is a very dangerous time for realizing the rights of the  people through street democracy, "he stressed.

The sociologist assessed the current behavior of the Armenian society  as naive, ignorant and subject to various manipulations. Meanwhile,  almost all the legends that this very society has been feeding on for  years have already been broken. Meanwhile, the new realities  practically do not make anyone want to analyze the reasons for their  occurrence. Moreover, even against this background, supporters of the  authorities are quoting Putin. And some parties have forgotten about  the existence of the Constitution.  Against the background of such a  loss by all political forces, without exception, of connection with  reality and their own relevance, everyone, according to the  sociologist's estimates, has to start from scratch.  However,  citizens entitled to vote do not understand this and do not want to  understand. People continue to look for solutions within the existing  political field. Meanwhile, people who have been part of this field  since 1994 are simply not able to give these solutions. Otherwise,  they would have done it in the last 26 years.

The sociologist sees a way out of this situation in sobering up  everyone and everything. First of all, politicians who call people to  rallies. The authorities, in turn, need to present a roadmap to bring  the situation to early elections. Citizens, in turn, need to realize  the impossibility of solving problems, including the problems of  Artsakh, by new people using old methods.

"In this light, the salvation of the nation appears to be people who  today are not going to choose either the current or the former. First  of all, because of their own ability to think about the future and  analyze the current situation. The problem is that today, with the  exception of a small thinking part in our society, the question of  where we are going and what, in fact, we want, is still not worth it,  "summed up Sargsyan.