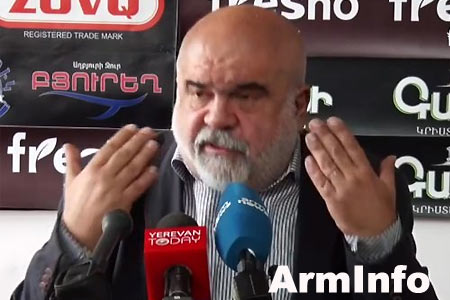 ArmInfo. The problems existingin Armenia today significantly exceed the plans of Prime Minister Nikol Pashinyan to steer the country out of the current situation. Directorof the Caucasus Institute in Yerevan, Alexander Iskandaryan,  expressed a similar opinion to ArmInfo.

The Prime Minister's "conditional" roadmap, generally speaking, is a  compilation of two different elements subjected to be implemented.  The point is that post-war problems have been added to the existing  social problems that need to be solved, and immediately, just to  return the country to normal life>, he stressed.

on November 18, Armenian Prime Minister Nikol Pashinyan  announced his intention to carry out full-scale reforms in the  country. Considering himself the main responsible for the current  situation, he stressed that the responsibility to get out of it is  also his responsibility.

The following are among the immediate tasks of the government: the  resumption of the peace process in the format of the OSCE Minsk Group  co-chairs with an emphasis on the status of Artsakh and the priority  of returning the people of Artsakh to their places of residence.  Restoring normal life in Artsakh, residential and public buildings  and infrastructure. Social guarantees for servicemen with  disabilities, the immediate return of captured military personnel and  civilians, providing them with social guarantees, as well as army  reforms, overcoming the coronavirus and eliminating its consequences,  demographic problems. Pashinyan voiced the need for changes in the  Electoral Code and the Law on Parties, the creation of an institution  of specialized judges, and the application of the law on the  confiscation of illegal property.

According to the political scientist, the "social" part of  Pashinyan's proposals was part of the electoral program of  Pashinyan's "My Step" bloc. Meanwhile, in Iskandaryan's opinion, the  local authorities and state departments had to deal with the  resolution of social problems for the last 2.5 years. In this light,  Iskandaryan sees a big difference between the problems voiced by  Pashinyan and those requiring immediate resolution. According to him,  today it is more important and a priority to achieve political  agreement. The political scientist characterizes the situation in  Armenia as a political crisis, accompanied by a split in society.  And, according to his forecasts, the situation will only get worse.

"As of today the servicemen are returning from the front, the houses  of the Artsakh people are destroyed, people have nowhere to go,  because their houses remained in the territory occupied by  Azerbaijan. All this is compounded by the economic crisis. In this  light, it is certainly necessary to start solving the problems  outlined by the prime minister in his plan, but only by uniting the  Armenian society politically.The settlement of the acute political  crisis in the country, in my opinion, is still a priority,"  Iskandaryan summed up.