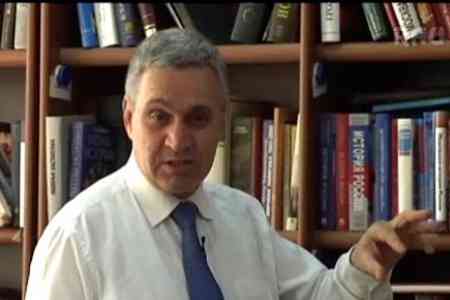 ArmInfo.In an interview with ArmInfo, Artsakh security expert, former adviser to the Artsakh Foreign Minister Hrachya Arzumanyan comments on the geopolitical  aspects and the background of the 44-day war, shares his vision of  the future possible domestic and foreign policy impulses around  Armenia and Artsakh.

Hrachya, all these 44 days you were in Artsakh - in the very  epicenter of events. Please, share your assessment of what happened.  How the defeat of the Armenian army could happen, what contributed to  this?

In my opinion, it would be better for us as a people to recognize the  fact of our defeat in the war organized by Turkey, Russia and  Azerbaijan. It is necessary to understand that this war has become a  concrete, joint initiative of two centers of power. Armenia, by  definition, could not win the war in such a initially planned  situation. We were doomed to defeat against such a force, which is by  no means only a military one. And we need to realize this. We also  need to understand that this is a military defeat. This is not  genocide, this time there was no talk about the extermination of the  Armenian people. We fought, our soldiers fought for the outcome of  the war. The war demonstrated a fundamentally different situation  from the situation happened one hundred years ago, demonstrated a  brilliant army, a brilliant Armenian people, rallying to win this  war. And it is not our fault that the forces were so unequal.  Therefore, I do not believe that something fatal for our people  happened during these 44 days. We will prepare for the next war and  play in a completely different way.

The war ended only a couple of days ago, but already today we hear  calls to the Artsakh people to return. Is the natural return of our  compatriots to their homes reasonable from a geopolitical point of  view?

We need to realize that Artsakh is today divided between Turkey and  Russia. Accordingly, I consider the participation of the Artsakh  people in this division and thus its legitimation to be wrong. In  this light, I consider it necessary to distance as much as possible  from the result obtained in the Russian-Turkish games, from the war  actually unleashed by Russia and Turkey against the Armenian people.  Formalization of the results of this war between themselves is a  matter for Russia and Turkey. I consider it a mistake to make the  Armenian people and Artsakh Armenians a participant and hostage of  these games. Ideally, Armenia should not have put its signature under  the act of surrender at all and risked our people. Armenian people  can feel protected, feel safe only in an Armenian state under the  protection of an Armenian soldier.  If there is none of this, no  international forces will ensure its status and security. The Artsakh  Armenians, protected by Russian peacekeepers, will become a hostage  and a factor with which Moscow will influence Yerevan. In this light,  in my opinion, it would be more correct to admit defeat, evacuate the  Artsakh people to the territory of Armenia and start building a  completely different Armenia, which would later be able to return  Artsakh and even more. The present Armenia has been defeated. We must  admit this and start building the state anew. With a different  economy, with a different army and with different allies.

The Armenian leadership has demonstrated its complete inadequacy to  the positions held. And I'm still inclined to qualify what happened  as a betrayal. The Armenian political leadership betrayed its own  people, its interests, betrayed the army and society. We must state  this. And this statement requires the resignation of such a  leadership. Against this background, the resignation of Nikol  Pashinyan gives us a chance to restore and save face. The signature,  the consent of Armenia to the division of Artsakh will lead us into a  more difficult situation in the future.

What, apart from saving face, can a refusal to sign give Armenia?  After all, the Russian military is already in Artsakh.

This is not the problem. The problem is much deeper - in our ability  to take such steps in the conditions of absolute dependence of  Armenia on the military might of Russia. I saw with my own eyes how  it works in Artsakh, where Russia quite deliberately did not use air  defense systems in order to achieve the result that we see today. Air  defense systems were included at the very end. And by "closing the  sky" Russia has clearly demonstrated its own ability to military  neutralize enemy drones and aircraft. Against this background, a  quite natural question arises - what will happen to Armenia in the  future? After all, we have a combined air defense system with the  Russian one. Can anyone guarantee the Armenian people that the same  approach will not be applied to Armenia in the future? Our ally did  not help us in the key issue of Artsakh. And where is the guarantee  that a similar situation will not happen in Armenia?

Do you see a candidate to replace Pashinyan today?

No. I did not deal with the internal political situation in Armenia.  But I think that in this situation, replacing Pashinyan with new  faces will in any case be correct. These new persons will take  responsibility for the country or for the implementation of the  Russian-Turkish agreements on Artsakh. At the same time, I, of  course, do not see these new faces among the 17 political forces  striving for power. All these people representing Serzh Sargsyan,  Robert Kocharian and Levon Ter-Petrosyan are also responsible,  including for the past and, accordingly, for betrayal.  Judging by  the nomenclature of Russian weapons and equipment deployed in  Artsakh, it seems that they will carry out, let's say, not only a  peacekeeping mission. And after killing three Iranian border guards  by Turkoman terrorists, can it be stated that after a 44-day war, the  region is becoming another arena for hybrid wars?  Considering that  this situation was designed by Moscow and Ankara, I would like Moscow  and Ankara to seek a solution to the already maturing problems you  are talking about, without the Armenian people, without the Armenian  warrior, and not at the expense of the life and death of Armenians.  Russia itself took this path of resolving the problem, and  accordingly, its independent search for a way out of the situation  created, including by it, will be fair. Messrs Putin and Erdogan will  have to solve the problem, even without Aliyev. This is not an  Armenian or even an Azerbaijani problem. Our problem is the loss of  Artsakh. And for a while, we need to come to terms with this. I think  that there is nothing terrible, especially fatal, in a lost war for  us. We will always have the opportunity to replay the situation. If,  of course, we are able to build a completely different Armenia.

Yes. But there is one more thing here. Doesn't the new Russian-Turkish  confrontation on the territory of Azerbaijan and Artsakh create the  possibility of recognizing Artsakh following the example of Abkhazia  and South Ossetia?

I consider the implementation of this scenario undesirable for  Armenia and Artsakh. After the recognition, both Abkhazia and South  Ossetia fell into complete dependence on Russia. We must avoid a  situation in which the Armenian statehood will depend on one center  of power. In this light, the recognition of Artsakh by Russia alone  does not in any way correspond to the interests of the Armenian  people. Recognition of Artsakh can only be international and  coordinated with other centers of power. And this path is also the  path towards the salvation and preservation of Artsakh as Armenian.  But today, in the conditions of the total Russian and Turkish  presence in the South Caucasus, I do not see any opportunities for  solving the problem in this way. The fact is that Messrs. Putin and  Erdogan tend to interpret and disrespect international law quite  freely. In this light, today the Armenian people should be concerned  exclusively with ensuring the military security of the part of  Armenia that we have. Because the destruction of the Republic of  Artsakh that took place before our eyes may well serve as a model for  the destruction of the Republic of Armenia. This task has not been  solved today. We bet on Russia as a guarantor of our security.  The  bet did not work, therefore, we need to look for other ways for this.