Historian: Another Russian-Turkish war is going on in Artsakh 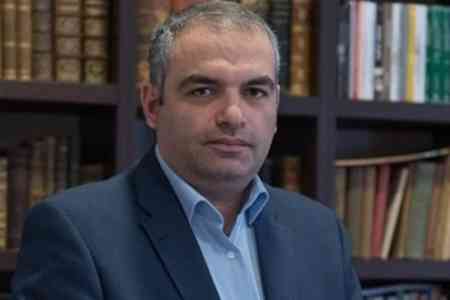 "Based on the analysis of the actions of the forces directly or  indirectly involved in this war, as well as their interests, we have  to state that the war between Armenia and Azerbaijan is in reality a  mediated war between Turkey and Russia. A kind of review of forces is  taking place in Artsakh now. And of course, impressive ones.  geopolitical accounts, "he said.

According to Demoyan's estimates, the very fact of the 5th generation  war testifies to the geopolitical dimension of what is happening. The  war unfolding directly on the Russian borders. War, the twists and  turns of which are closely monitored by both Russian and American  satellites. A war in which a huge number of weapons are used and  destroyed. Wars are part of big business.

Commenting directly on the course of hostilities, Demoyan, starting  from the analysis of the 5th generation wars, predicts the imminent  withdrawal of Azerbaijani forces from the south of Artsakh. A  necessary condition for this, in his opinion, is the competent  replenishment and staffing of the Armenian army and the preservation  of the density of fire in the direction of the south.

Attaching secondary importance to the territories in modern wars, he  assessed the decision of the Armenian command to retreat in the  southern sector of the front as the only correct one. Since the  decision was made in order to avoid large losses in personnel.

"I am convinced that we have not lost the lines that could lead to  serious consequences, especially to a turning point in favor of  Azerbaijan. Accordingly, the correct tactics and aspiration will  fully allow the Armenian army to return the ceded territories. The  main thing is to act within the framework of the logic of modern  wars. someone else's and already own experience ", - concluded  Demoyan.