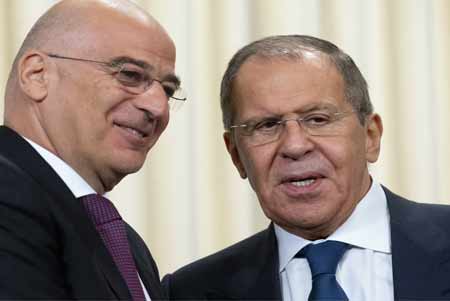 ArmInfo.Athens pointed out the unacceptability of the sale of arms to Ankara, since it is used by the Turkish side to destabilize the situation in all countries of  the region.  Greek Foreign Minister Nikos Dendias stated this at a  joint press conference with Russian Foreign Minister Sergei Lavrov in  Athens.

He noted that he expressed concern about the negative role that  Turkey plays in Syria - undermining the gains achieved in the fight  against Daesh. Dendias stressed that Turkey has become a travel agent  for jigadists who are ferried to various fronts where hostilities are  taking place.

The Greek Minister noted that he had discussed with his Russian  counterpart the situation in the zone of the Nagorno-Karabakh  conflict. "We discussed the efforts being made by the international  community to achieve a truce between the conflicting parties. In this  context, I informed about my recent visit to Yerevan and the  importance of achieving a ceasefire regime," Dendias said.

In turn, Lavrov noted that he had informed his Greek counterpart of  the role that Russia, as a co-chair of the OSCE Minsk Group, plays in  order to stimulate the Nagorno-Karabakh settlement, starting with an  immediate ceasefire. At the same time, he added that Moscow is  interested in ensuring that all problems and conflicts in the  post-Soviet space are resolved and overcome. -