Volunteer units are being formed in Armenia 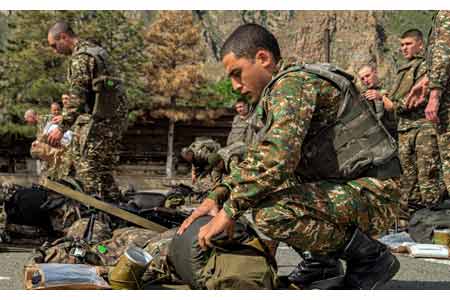 ArmInfo. A volunteer detachment has been formed in the city of Vanadzor. Mayor of Vanadzor Mamikon Aslanyan announced this on his Facebook page.

He emphasized that everyone can join the Vanadzor volunteer  detachment. Mamikonyan noted that the newest history of our  Motherland is now being written on the battlefield, and everyone is  obliged to contribute to the victory in the holy war, to which the  Armenian side was forced.

In turn, the governor of the Lori region of Armenia Andrei Ghukasyan  said that he had signed up for volunteers. Ghukasyan also said that  communities of Lori region have joined the Prime Minister's call to  create volunteer units. The governor stressed that he will represent  the troops on October 22.  Mayor of Armavir city David Khudatyan also  said that volunteer groups should be formed in the city. "We will  contribute to the common victory," the mayor stressed.

Governor of the Tavush region Hayk Chobanyan also rejected the call  of the prime minister. On his Facebook page, Chobanyan said that  volunteer units were being formed in Tavush.  And a volunteer squad  will be formed in Yerevan, said Press Secretary of Yerevan Mayor Hayk  Marutyan Hakob Karapetyan. Karapetyan noted that the mayor of the  city, Hayk Marutyan, will lead the detachment.  Also, volunteer  groups are formed in the Aragatsotn region.

It should be noted that the day before, in his video message, RA  Prime Minister Nikol Pashinyan appealed to the heads of state  authorities and local self-government bodies to form volunteer  detachments to resist the Azerbaijani-Turkish aggression.