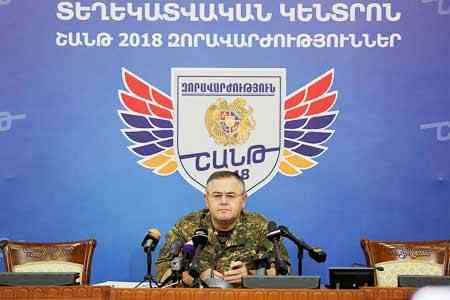 ArmInfo. The air defense of the RA Armed Forces destroyed an enemy drone sent to the territory of Armenia yesterday. Radio Liberty was told about this by the Chairman  of the Military Industry Committee Artak Davtyan, who these days  coordinates the defense work in Syunik.

He recalled that the Azerbaijani Armed Forces have already struck at  certain elements of the military infrastructure on the territory of  Armenia. "The day before, our air defense systems were operating in  Syunik. The enemy tried to send a UAV to the territory of Armenia.  The drone was found and destroyed.  This closed the issue. This is  not the first case. tries to use other techniques to complete his  task and not lose technique, "he said.

To clarify what goal the opponents are pursuing in Syunik region,  Davtyan stated that the enemy forces are trying to conduct  intelligence activities in order to understand how Armenia supports  Artsakh during the hostilities, and probably pursues other military  goals as well. He also reiterated that the enemy is also trying to  strike at military targets.

Speaking about the situation on the Armenian-Iranian border, he noted  that the situation is normal, life on the border goes on in a natural  course. "I was there today. There are no significant changes, trade  continues, work continues in a regular and calm regime. There are no  problems, and I think there will be no problems.  I would like to  express my gratitude to Iran for a balanced position and  understanding," he said.  Davtyan once again stressed that the  purpose of his activities in Syunik is to assist community structures  in preparing the population for possible encroachments of the enemy.

He also noted that the actions of the Azerbaijani side in many issues  are surprising, including the refusal to evacuate the bodies of their  soldiers from the battlefield. "It can be seen that political goals  prevail over the natural needs of the population - to bury their  fallen warrior as it should be by tradition, and not to leave him to  rot in the field," concluded Davtyan.