Mnatsakanyan to meet with Lavrov in Moscow 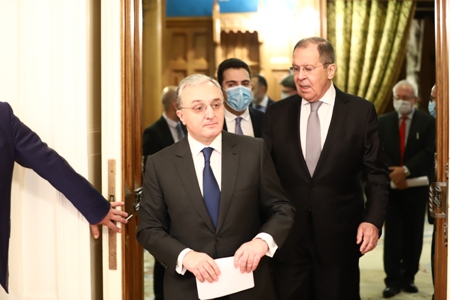 ArmInfo.Armenian Foreign Minister Zohrab Mnatsakanyan, who is on a working visit to Moscow, will meet with his Russian counterpart Sergei Lavrov. Press secretary  of the Armenian Foreign Ministry Anna Naghdalyan said this in an  interview with ArmInfo correspondent "A meeting between Mnatsakanyan  and his Russian counterpart is envisaged. The agenda of the meeting  includes the situation in the zone of the Nagorno-Karabakh conflict,  as well as the implementation of the ceasefire agreements,"  Naghdalyan said.

It should also be noted that on October 23 the Armenian Foreign  Minister will leave for Washington to meet with US Secretary of State  Mike Pompeo. It is not excluded that a meeting of the Foreign  Ministers of Armenia and Azerbaijan will take place in Washington  with the mediation of the USA.