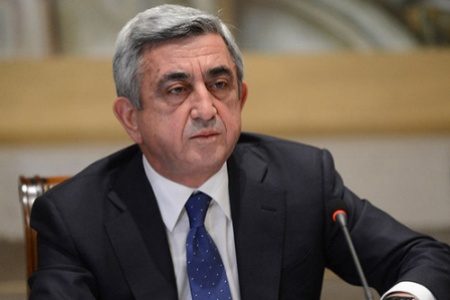 ArmInfo.The third president of Armenia, Serzh Sargsyan, is in Artsakh. This was reported by the press service of Sargsyan's office.

In particular, the message reads: "Serzh Sargsyan is in Artsakh. The  purpose of the visit of the third president of Armenia is to combine  the skills, experience and efforts in warfare. In the name of the  right to live peacefully in the homeland>.

Note that during the Artsakh war, Serzh Sargsyan signed a trilateral  ceasefire agreement on the part of Armenia on May 12, 1994. It should  be noted that the first president of Artsakh, the second president of  Armenia Robert Kocharian is already in Artsakh, and the ex-minister  of defense of Armenia, the ex- commander of the Defense Army of  Artsakh Seyran Ohanyan is also there.

To remind, Robert Kocharian was directly involved in organizing the  defense of the republic in the 90s.  Kocharyan and Ohanyan preferred,  due to their high organizational experience and knowledge, to be with  their compatriots these days.