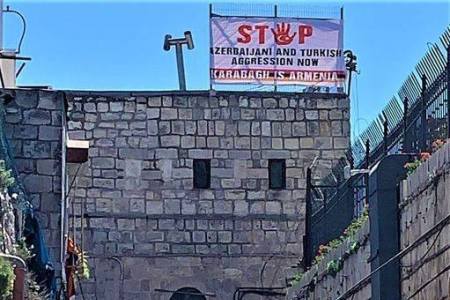 ArmInfo.The Israeli Defense Ministry is now under tremendous pressure to stop supplying weapons to Baku. The famous Israeli blogger Alexander Lapshin wrote about this on his Facebook page.

"Today there are posters in support of Armenia everywhere in  Jerusalem. And I want to say that in most cases it is not the  Armenians who hang them, but ordinary Jews sympathetic to Armenia. In  many Israeli social media groups, people turn to and ask where to buy  an Armenian flag to hang on their balconies. I repeat that this is  not written by Armenians, but by ordinary Israeli Jews," Lapshin  emphasized, noting that he means that there seems to be a stereotype  that all Israelis were against Armenia, helping the Turks and Aliyev.  "This is not true!" said the blogger.

It should be noted that Armenia yesterday recalled the Israeli  Ambassador for consultations due to the fact that the Israeli  government, ignoring the principles of humanitarian law and  elementary morality, today, when the Azerbaijani Armed Forces  together with Turkish officers and Syrian terrorists are shelling  peaceful villages and cities of Artsakh and Armenia, continues to  supply deadly weapons to Baku.