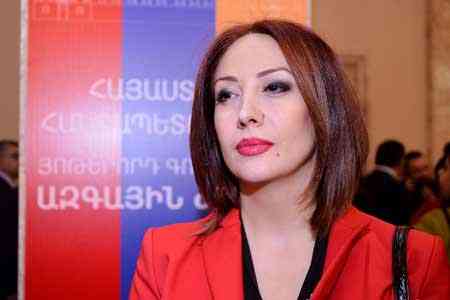 ArmInfo.Speaker of the National Assembly Ararat Mirzoyan said that MP from the "My Step" faction Gayane Abrahamyan resigned, the press service of the  parliament reports.

In particular, the Speaker's statement reads: Pursuant to Article  155.1 of the Constitutional Law the Rules of Procedure of the  National Assembly, the deputy of the National Assembly of the  Republic of Armenia Gayane Abrahamyan submitted resignation letter on  September 25.

To note, earlier two MPs from the "My Step" faction, Arsen  Julfalakyan and Armen Pambukhchyan, announced that they were laid  down their lawmaker's mandates. Julfalakyan stated that he was  leaving because of contradictions with the Minister of Education,  Science, Culture and Sports Arayik Harutyunyan, and Pambukhchyan said  that he intends to move to work in the executive branch.  Gayane  Abrahamyan has not yet commented on her decision.