Arthur Gevorgyan, former member of the Armenian parliament, arrested  in the US 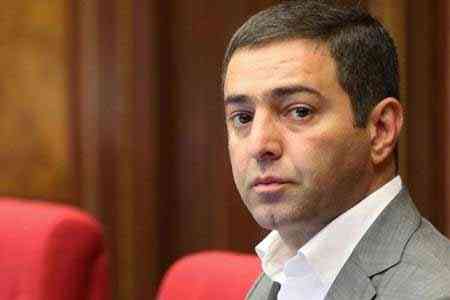 ArmInfo. The General Prosecutor's Office of Armenia reports that the former deputy of the Armenian parliament Artur Gevorkian has been detained in the US in  connection with the violation of the country's legislation.

According to the source, the Prosecutor General's Office is preparing  documents to apply to the relevant US structures in connection with  the issue of transferring Gevrokyan to the Armenian authorities  within the framework of his search.

"At the same time, it should be noted that the absence of a bilateral  international treaty on extradition between Armenia and the United  States in the field of transfer of persons in criminal cases may lead  to some difficulties in the extradition process," the structure's  statement underlines.  It should be noted that former RPA deputy  Artur Gevorgyan was charged under Article 314.3 (concealment of data  on an especially large scale subject to declaration - Ed.) And 310.1  (Illegal enrichment - Ed.) Of the RA Criminal Code. Arrest was chosen  as a preventive measure.