Forecast: As a result of its own inaction, the authorities will again  receive the "Tovmasyan`s" CC 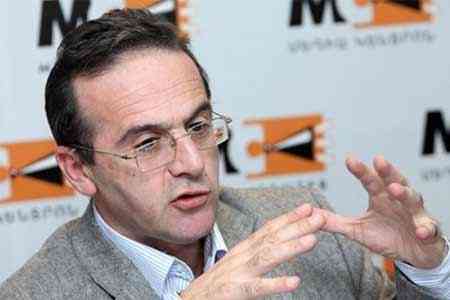 ArmInfo. Regardless of the results of the elections of judges of the Constitutional Court, at one level of discussion of their candidacies, the parliament took  responsibility for eradicating social justice in the country. Human  rights activist Artur Sakunts expressed a similar opinion to ArmInfo.

By secret ballot, the Armenian parliament on September 15 elected  three new judges of the Constitutional Court. 88 deputies of the "My  Step" bloc, "Prosperous Armenia" and "Enlightened Armenia" did not  participate in the voting.

"According to the applied technical, specialized terminology, these  discussions had nothing to do with the value system on the basis of  which the revolution took place in Armenia. And it is the political  majority that is responsible for this rejection of the values of the  revolution. Moreover, by its actions," My Step "created free space  For the activities of the so-called opposition. Thus, it is the  political power that bears responsibility for all subversive actions  of the "former." Due to the loss of such qualities as consistency,  adherence to principles and value basis, "the human rights activist  stressed.  Refusal of "Prosperous Armenia" and "Enlightened Armenia"  to participate in the voting of Sakunts conditioned their desire to  evade responsibility for its results. Moreover, a very favorable  situation has been created for them at the level of the value base.  On the whole, the human rights activist considers the situation in  which the authorities act on the basis of the political situation,  and not principles, and at the same time tries to appear before the  society from the position of a responsible force very strange.  "It  is definitely impossible to restore trust in the Constitutional Court  in this way. Meanwhile, this is the main goal of society and the  government. The velvet revolution was a response of society to the  lack of respect for the authorities for human rights and dignity. Any  sacrifice of these values, any a compromise is their destruction. And  the responsibility for this will be borne by the political majority,  since the revolution did not end with the election of three judges,  "he stressed.

According to the human rights activist, the absence of radical  reforms in the judicial and legal sphere, the rejection of vetting,  and the replenishment of the sphere with new personnel led to the  destruction of the revolutionary atmosphere in the country. The  atmosphere of change has been replaced by an atmosphere of real  politik, devoid of any value basis. And the same cadres, which,  according to the authorities, do not exist today, could be perfectly  trained, just as today cadres are being trained for the  anti-corruption court or the anti-corruption department of the  Prosecutor General's Office.

"As a result of this inaction of the authorities, it will receive the  same Constitutional Court that existed before the changes. Only the  names have changed, the essence and content remained the same. The  presence of the same Yervand Khundkaryan in the" new "Constitutional  Court is the result of the absence of fundamental reforms in the  judicial system. By approach, the parliament took upon itself direct  responsibility for the absence of radical reforms in this area. The  discussion of candidates and their election had nothing to do with  the restoration of social justice in the country, "the human rights  activist concluded.  The meeting of judges nominated the chairman of  the Court of Cassation Yervand Khundkaryan as a candidate. Government  - Associate Professor of the Department of Constitutional Law of YSU  Edgar Shatiryan. The President of Armenia re-nominated Artur  Vagharshyan, Head of the Department of State and Law Theory of YSU.

" 84 persons voted for "Yervand Khundkaryan, 2 against, two ballots  were declared invalid. Artur Vagharshyan's candidacy was supported by  86 deputies, one was against, another ballot was declared invalid. 85  were voted for Edgar Shatiryan, 3 parliamentarians were against.