Environmentalist: The government has no right to have such a vague  position on Amulsar 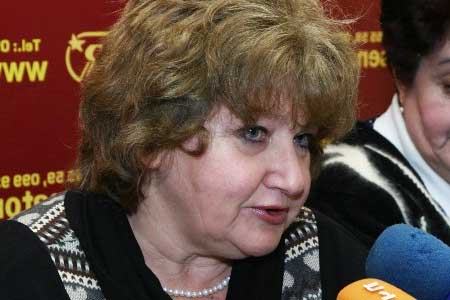 ArmInfo. The government has no  right to have such a vague position on Amulsar, Inga Zarafyan, head  of EcoLur NGO, stated this in an interview with Arminfo.

The environmentalist recalled that after the "velvet" revolution and  to this day, Amulsar's issue continues to hang in the air. Meanwhile,  in her opinion, the government has no choice but to fulfill the  requirement of the environmental and expert community to recall the  EIA (environmental impact assessment) for the Amulsar project.  According to the expert's estimates, the document was approved with  legislative violations and has many gaps and shortcomings. Thus, the  positive conclusion on the EIA of the project issued earlier to  Lydian Armenia is illegal. At the same time, the company itself  cannot, according to Zarafyan, claim any compensation for the funds  invested in the project, taking into account the illegal actions on  the approval of the EIA. If desired, Lydian Armenia can present a new  draft EIA, which will take into account all the existing risks of  developing the Amulsar field. Meanwhile, the Armenian government, as  noted by Zarafyan, is trying to transfer the Amulsar issue into the  field of political decisions.

The environmentalist recalled the mass protests that took place last  week near the Amulsar mine, which clearly demonstrated that the local  population is categorically against this project. At the same time,  if at the beginning of the protests the police acted openly by force,  then later, most likely, they received other instructions from above  because of the wide resonance in society. Zarafyan attributes this to  the fact that the authorities, based on the example of these clashes,  got an idea of what the protest movement could turn into if the  situation further escalated. "Everyone is against the development of  the Amulsar field, except for Lydian Armenia and those who hope to  receive dividends from this project," the expert noted.

Zarafyan also gave a negative assessment of the activities of the new  security organization of Lydian Armenia - "Special Security Service".  "We have never seen so many guards deployed on the field before.  At  the same time, the guards were armed and openly provoked the  tenseness of the situation, "she said.

As noted, local residents at three sentry posts installed at the  approaches to Amulsar continue to monitor the situation in order to  prevent the passage of heavy equipment and begin work on the  operation of the mine.  The total cost of the Amulsar project is $  370 million. The life of the deposit is 10 years and 4 months, with  an average of 200 thousand ounces of gold planned to be mined  annually. We add that Lydian Armenia is a subsidiary of the British  offshore Lydian International. Environmentalists and ordinary  citizens are concerned that the operation of the mine may lead to the  pollution of the mineral underground waters of Jermuk and Lake Sevan.  In addition to the water basin, the public is also concerned about  the possible presence of uranium manifestations at the deposit.  Last  week, there were clashes near the Amulsar mine involving police and  green activists who oppose the development of the mine. The situation  escalated after the Lydian Armenia security organization - the  "Special Security Service" - dismantled the cabins of the activists  near the field and installed their own ones. During the clashes, over  10 activists were detained, as well as four employees of the security  organization suspected of hooliganism. Subsequently, the mayor of  Jermuk, Vardan Hovhannisyan, stated that the company did not have a  permit for construction work in this territory, and therefore the  Lydian Armenia's cabins were dismantled and moved to another  location.