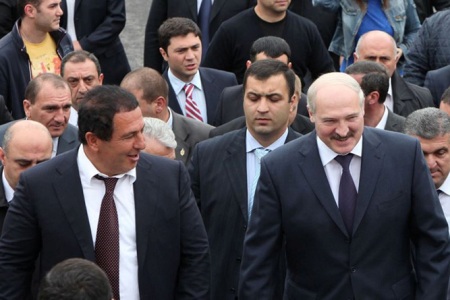 ArmInfo.  The leader of the  Prosperous Armenia Party Gagik Tsarukyan congratulated Alexander  Lukashenko on his victory in the presidential elections, the party's  press service reported. "Dear Alexander Grigorievich, my good friend  and comrade, I cordially congratulate you on your confident and  convincing victory in the presidential elections in Belarus. The  unprecedented number of people who voted for you in the elections  testifies to your unshakable reputation in the country and the  unconditional trust of the people in you. I am convinced that in the  coming years of your tenure in high office you will make every effort  to develop the Republic of Belarus and improve the welfare of the  people. I am sure that thanks to you, the relations between Armenia  and Belarus will receive a new impetus, and the fraternal friendly  ties between the two peoples will strengthen even more. I myself am  ready to make every effort for this. Once again, congratulating you  on your victory, I wish you good health, fruitful work for many  years, and new successes and achievements for the people of Belarus,  "Gagik Tsarukyan's congratulatory message reads.

To note, according to the data published by the Central Election  Commission of Belarus, Alexander Lukashenko won 81.35% of the vote in  the presidential elections in Belarus.