Serzh Sargsyan: In 2018, the Armenian society was not ready to listen to the truth about the April events 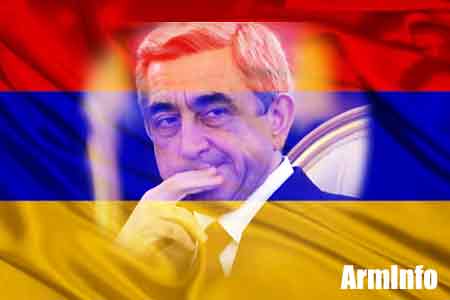 ArmInfo. The third president  of Armenia, Serzh Sargsyan, in a short video entitled "Let's be  honest: Serzh Sargsyan on the April war" told why he was silent about  the events of April 2016 for a long time.

So, when asked why he was silent before the hearings in the  parliamentary commission on the April events, Sargsyan said in  particular: "I was silent for a long time, because I did not want to  further aggravate the situation in our country, deepening  polarization, dividing our society to the end," - said the third RA  President.

Clarifying what prevented him from speaking, Sargsyan stated that  2018 was a very emotional year, and chaos and aggression increased  day by day, delighting only enemies.

"In this emotional environment, part of our society was simply not  ready to listen to the simple truth," he said, adding that it took  time for everyone to understand the situation on their own. At the  same time, he assured that he would talk about this in more detail.

To recall, on the night of April 2, 2016, the armed forces of  Azerbaijan committed a large-scale military aggression against  Artsakh. The war was accompanied by war crimes, gross violations of  the laws and customs of war, as well as the norms of international  humanitarian law.  The April hostilities have become the largest  since the May 1994 ceasefire agreement. During the hostilities from 2  to 5 April, all Armenian military units, including artillerymen,  tankmen and anti-tank units, showed themselves excellently. During  the intense fighting, the units of the Artsakh Defense Army destroyed  2 Azerbaijani helicopters that attacked the positions of the Armenian  side, 26 tanks, as well as 14 drones, 1 BM-21 (Grad) rocket and  artillery installation, 4 IFVs and 1 engineer installation.

During the hostilities on the Line of Contact, the Armenian side lost  64 servicemen, 13 volunteers, 4 civilians, more than 120 people were  wounded, 9 more servicemen died after the cessation of active  hostilities, in the period until April 13, several died later in  hospitals.  Based on the data of the State Department, presented on  May 16 in Vienna in the same year, it becomes clear that in addition  to 81 losses from the Armenian side, about 270 Azerbaijanis died. At  the same time, analysts of the international research group  Bellingcat estimate Baku's losses at 400-500 killed soldiers.

After the Velvet Revolution, a commission was established in the  Armenian parliament to investigate the circumstances of the April  2016 war.

In June this year, the commission completed its activities, and  intends to summarize all the material in September to submit a report  on the work done.