Media: The number of Armenians killed in the explosion in the port of  Beirut reaches 11 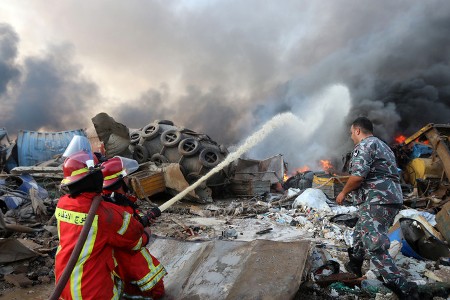 ArmInfo. The number of Armenians killed  in the explosion in the port of Beirut has reached 11.

As reported by Arevelk, another 250 representatives of the Armenian  community were injured.

To note, a powerful explosion occurred on the evening of August 4 in  the port of Beirut. As reported later in the security structures of  Lebanon, ammonium nitrate detonated from a contraband cargo  confiscated from one of the ships several years ago. All these years,  explosives have been stored in a warehouse in the port, awaiting  their destruction. Ammonium nitrate is used as a component of  explosives and as nitrogen fertilizer.

The explosion killed at least 135 people, more than 5,000 were  injured, about 250,000 were left without shelter. The blast wave  destroyed and damaged dozens of houses, cars, glass were broken in  many quarters of the capital. At the scene, the debris is being  dismantled and the search for survivors and the dead. A four-day  mourning period has been declared in the country, a 2-week state of  emergency has been introduced. The death toll is expected to rise.

Earlier, the RA MFA reported that the explosion damaged the building  of the Armenian Embassy in Beirut, a number of community buildings,  property and material damage was also inflicted on the Catholicosate  of the Great House of Cilicia. The Foreign Ministry also confirmed  the death of 6 Armenians, and the injury of more than 100.