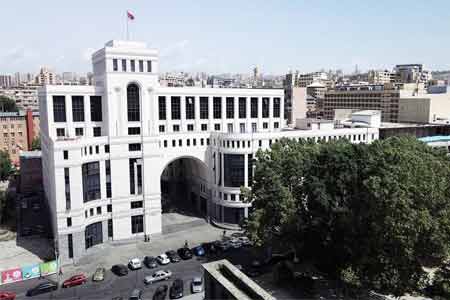 ArmInfo.RA MFA Spokeswoman Anna Naghdalyan makes a statement in connection with the aggravation of the situation  in the north-eastern direction of the Armenian-Azerbaijani border. So in a statement, Naghdalyan, in  particular, says:

"We strongly condemn the ongoing attempts by Azerbaijan to maintain  tension in the northeastern part of the Armenian-Azerbaijani border  and, for this purpose, carry out targeted criminal attacks on  civilian infrastructure and civilians in the villages of Chinar and  Aygepar, Tavush region, which is a clear violation of international  humanitarian law.

Azerbaijan must unconditionally stop such actions and take the  necessary steps to prevent further tension, for the consequences of  which it is fully responsible. "

As previously reported by the RA Ministry of Defense, the above  border communities were shelled by the Azerbaijani Armed Forces from  82 mm mortars and 120 mm grenade launchers. As a result of the  shelling, living quarters were damaged, there were no casualties and  casualties among the civilian population.