A view from Moscow: Status, security and refugees are the key issues  of Karabakh negotiations today 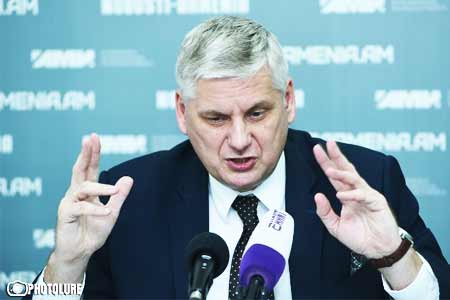 ArmInfo. Three main problematic issues are discussed today at the negotiating table on the settlement of the Karabakh conflict. This is the status of Karabakh, the security of the areas around the former NKAR, as well as the problem  of refugees. Sergey Markedonov, a leading researcher at the MGIMO  Insitute for International Studies, expressed this opinion during the  online conference "Events in Armenia, a View from Moscow" at the  Sputnik Armenia Press Center.

"At the same time, I don't see anything sensational in the statement  made by the Russian Foreign Minister Sergei Lavrov on a phased  resolution of the conflict. This terminology was used a couple of  years ago in the Madrid principles. Thus, the settlement still takes  place on the basis of the updated Madrid principles ", the analyst  emphasized.

At the same time, Markedonov emphasized the priority need for  interconnection and synchronism between the withdrawal of Armenian  forces from the regions and the resolution of the status of Karabakh.  First of all, given the obvious security risks and the risk of  escalation of the conflict as a result of the withdrawal of Armenian  units from the areas around the former NKAR.

Another stumbling block, according to the analyst, is the legally  binding referendum contained in the updated Madrid Principles. This  already contains risks for Baku, given the high probability that  Karabakh people would vote for a status independent from Azerbaijan  at the referendum. There is still no certainty about the geography of  the "security corridor" of Karabakh-Armenia - will it pass only  through the territory of Lachin or will it involve Kelbajar.

Given such great discrepancies, Markedonov assessed the current  process around Karabakh as conflict management rather than direct  negotiations. According to his forecasts, given the lack of  prerequisites for a quick solution, this process can continue for  another 10 years. In his opinion, Moscow's position is quite  consonant with existing realities, and accelerated resolution of the  conflict is not in its interests.

"The status quo around the conflict is unacceptable for our Western  partners. We, evaluating the status quo as clearly not the best  solution, consider it necessary and possible to reach the final  compromise of its parties in the negotiations. It seems that this is  better than haste that can destroy the whole fragile and unstable  process. We don't need haste on the Karabakh issue, "the Russian  analyst concluded.

Currently, the settlement process is nominally proceeding on the  basis of the Madrid principles put forward by the co-chairs in 2007  and updated in 2009, which, among other things, provide for the  deployment of a peacekeeping contingent in the conflict zone. Baku,  at the same time, periodically cites the notorious   as an argument in the negotiation process. The Armenian side of the  negotiations mainly continues to appeal to the right of peoples to  self-determination. It should be noted that according to the UN,  Azerbaijan occupies the homes of 360 thousand Armenian refugees, and  Armenia - 250 thousand Azerbaijani ones.