Armenia, Cyprus and Greece demand a vote on the candidacy of the  chairman of the UN General Assembly, which Turkey claims 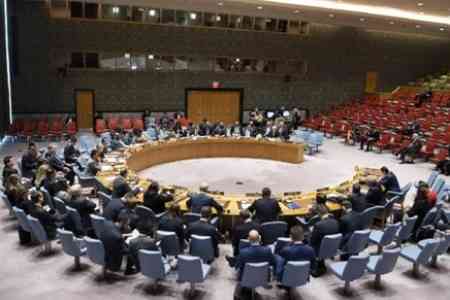 Naghdalyan recalled that according to the principle of geographical  rotation at the UN, the representative of the East European country  should be elected the chairman of the 75th session of the General  Assembly.  "The candidate from Turkey Volkan Bozkir is the only one  for this post. Armenia, Greece and Cyprus, in violation of the  silence procedure, sent a letter to the President of the 74th session  of the UN General Assembly, Tijjani Muhammad-Bande, demanding a vote.  I would like to emphasize that even at the request of one country,  voting is mandatory, "the representative of the RA MFA noted, while  stating that this is the first time that the only candidate for the  post of head of the General Assembly is put to the vote.

At the same time, Naghdalyan assured that the desire of Turkey to  take this post is of concern not only to the Armenian side, but also  to a number of international partners.

"Armenia, Cyprus and Greece made a letter of violation of the silence  procedure. Moreover, Armenia and Cyprus submitted a joint letter,  which specifically states that" Turkey threatens the peace and  security of the entire region, and in order to achieve regional  dominance, constantly violates the UN Charter and international law,  including the UN sanctions regime.

The Armenian side also voiced the issue of the blockade of the  country by Turkey, which has been going on for more than three  decades, its policy of constant denial of the Armenian Genocide and  even justification of this crime. In a joint letter, Armenia and  Cyprus emphasized that the chair of the UN General Assembly should be  occupied by a representative of a country whose actions and policies  are consistent with UN norms and values. Obviously, Turkey is not the  best country that can meet these standards, "Naghdalyan concluded.

It should be noted that three months before the start of a new  session of the General Assembly, its chairperson is also elected. The  candidacy for the post of chairman of the General Assembly is put  forward on the principle of rotation from regional groups: African,  Asian, Eastern European, Latin American and Caribbean, Western  European, etc. Elections are held by secret ballot by simple majority  vote. The 74th session of the UN General Assembly opened on September  17 under the chairmanship of Tijjani Muhammad-Bande (Nigeria).