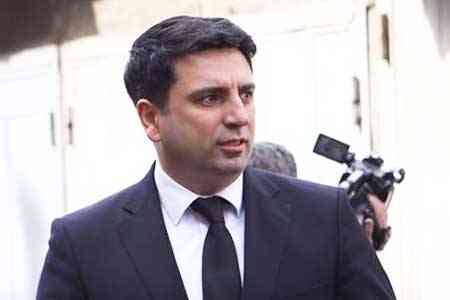 ArmInfo. A large-scale campaign to discredit the authorities has begun in Armenia. Deputy Speaker Alen Simonyan stated from the rostrum of the National  Assembly of the Republic of Armenia on April 17.

According to him, the campaign unfolded in connection with the  processes that are taking place in the country's parliament. It's  about confiscation of illegally acquired property, the return of  advertising on Public Television, etc., as well as those criminal  cases opened against prominent figures of the former regime. Trying  to use the situation, an active campaign is underway on TV channels  and websites to discredit the authorities, presenting things that are  far from reality.

The Deputy Speaker again appealed to abandon the use of statements  taken out of context, using by puppets of Robert Kocharyan, Serzh  Sargsyan and Mikael Minasyan of all kinds of fakes. Meanwhile, as the  Deputy Speaker noted, the authorities remained the same, being part  of the people. ''And all those who stole from the people, committed a  crime, will be punished, and let no one doubt: everyone will suffer a  deserved punishment", Simonyan said.