Avigdor Eskin: Hossein Amir Abdollahiyan`s statement is an  interference in the affairs of sovereign Armenia 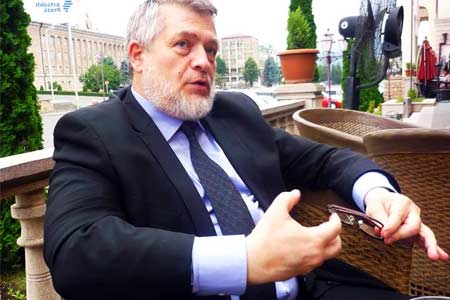 ArmInfo. Hossein Amir Abdollahiyan's statement is an interference in the affairs of  sovereign Armenia, well-known Russian-Israeli political scientist,  journalist Avigdor Eskin told ArmInfo, commenting on the words of the  special adviser to the Iranian parliament, Secretary General of the  Permanent Secretariat of the International Conference on the  Palestinian Intifada in the Iranian Parliament, Hossein Alamir Abir.

Abdollahiyan, as Tasnim reported, called unexpected the decision of  official Yerevan to open an embassy of Aormenia in Tel Aviv. "Such a  measure will undoubtedly run counter to the interests of the  Palestinian people and will have negative consequences for the  stability and security of the region," he said. He also described the  friendly relations of Tehran and Yerevan as one of the main factors  in maintaining regional stability and security, and expressed hope  that the Armenian government would think twice about its decision and  adopt the necessary plans to support the oppressed and displaced  population of Palestine.

As Avigdor Eskin noted, no one has the right to tell Armenia with  whom to be friends and with whom to establish diplomatic relations.  "Not only the states of the Caucasus region, but also many Arab  countries are actively establishing relations with Israel, since this  corresponds to their interests. Over the past year, Israel has  overtaken England, France, and Japan by GDP per capita. Israel is one  of the recognized world leaders in the field of high-tech, medicine  and agriculture. Friendship with Israel brings real benefits. The  Iranian government should learn from Israel for peaceful  construction. This would benefit both the people of Iran and its  neighbors. I hope the day is near when Iran will open an embassy in  Jerusalem. And Armenia can contribute to this", the political  scientist emphasized.