The number of coronavirus patients in Armenia reaches four 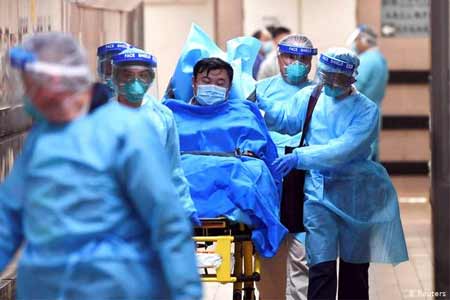 ArmInfo. The number of confirmed cases of patients with coronavirus in Armenia increased by three people and reached four.

As Prime Minister Nikol Pashinyan told citizens of the country  tonight, of the three new cases, two infected are citizens of Armenia  (45 and 27 years old), and another - a citizen of Italy (51 years  old) working in our country. All of them arrived in Armenia from  Italy. Two citizens have no health complaints, but the third has  fever and right-sided pneumonia.

Now, according to Pashinyan, a circle of people with whom the sick  were in contact is being determined to isolate them.

To recall, earlier in the country only one confirmed case of  coronavirus infection was detected it was  a 29- year-old citizen who  arrived in Armenia from Iran on February 29. The patient feels well.

ArmInfo. The Armenian Embassy in Italy addressed to the citizens of Armenia who are currently on Italian territory.

ArmInfo. Ryanair Airlines stops all flights from Yerevan to Italy and back until April 8  inclusive. It is reported by Interfax with reference to the press   service of the airline.

Armenian Foreign Ministry urges its citizens in Italy to interrupt  their trip and return to Armenia
Tuesday, March 10 2020 12:50

ArmInfo. The Armenian Foreign Ministry once again turned to the citizens of the Republic of Armenia, who are at that moment in Italy.

Armenian Ministry of Health urges citizens to refrain from visiting  Italy due to conavirus
Tuesday, March 10 2020 12:49

ArmInfo. The Ministry of Health of Armenia urges citizens to refrain from visiting Italy in  connection with the conavirus.