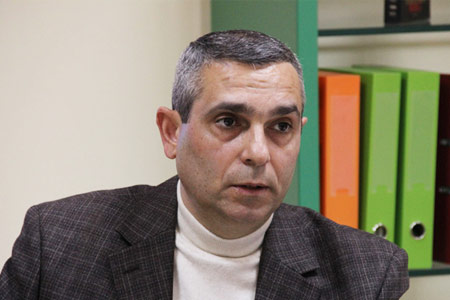 ArmInfo. Artsakh Foreign Minister, Artsakh presidential candidate Masis Mayilyan in an interview with ArmInfo comments on the latest processes around the  negotiations, the prospects for resolving the Artsakh conflict. He  shares some of the plans created by the "Mayilyan - New Artsakh"  election bloc as well as his own vision of the future Artsakh.

- The last meeting of the Foreign Ministers of Armenia and Azerbaijan  in Geneva, as you know, consisted of two rounds and lasted about 11  hours. At the same time, the ministers agreed to meet again in the  near future under the auspices of the co-chairs of the OSCE Minsk  Group. What, in your opinion, is this intensification of the process  talking about? Is it possible to say today that the parties have  already switched to substantive negotiations or is it just discussing  the creation of the conditions necessary for their resumption?

As we have repeatedly noted, full-fledged substantive negotiations  are possible only with the full participation of official Stepanakert  at all its stages. We regard the meetings and discussions held  between Yerevan and Baku as consultations in order to maintain the  dynamics of the peace process, which, ultimately, should lead to the  resumption of full-scale negotiations of Artsakh-Azerbaijan-Armenia.

- According to the information distributed by the press secretary of  the Armenian Ministry of Foreign Affairs, Anna Naghdalyan, following  the results of the talks in Geneva, the Foreign Minister Zohrab  Mnatsakanyan during the talks with his Azerbaijani counterpart Elmar  Mammadyarov stressed the need to involve the elected representatives  of Artsakh in the settlement process. Do you consider this a  necessary precondition for the continuation, and most importantly,  the successful completion of negotiations?

- The April war of 2016, in a sense, was quite expensive for its  initiator, Azerbaijan. Over the past three years, Yerevan and  Stepanakert have raised the issue of the need to ensure the physical  security of the Artsakh people in front of the mediators from the  OSCE Minsk Group and the international community as a whole. In this  light, does it seem possible to ascertain the collapse of  Azerbaijan's "military diplomacy" and, if so, how is this reflected  in Baku's negotiating positions today?

The so-called "military diplomacy" of Azerbaijan was initially doomed  to failure and has no prospects either today or in the future. After  the April aggression in 2016, the Armenian parties categorically  rejected the attempts of Azerbaijan to combine the peace process with  the escalation of tension on the contact line of the armed forces.  Today Baku is forced to accept this position, although at times it  expresses bewilderment why it is impossible to simultaneously conduct  negotiations and military operations on the border. I am convinced  that the final realization by the Azerbaijani authorities of the  futility of this strategy will be an important step on the road to  peace.

- In your opinion, should we expect a change in Baku's position in  resolving the Artsakh conflict after the change of power expected in  Azerbaijan? After all, having become president, Mehriban Aliyeva, in  all likelihood, it will be necessary to present at least some  progress to the Azerbaijani society around the conflict, of course,  in its own understanding.

The positions of the Azerbaijani side on the settlement of the  Azerbaijani-Karabakh conflict as a whole maintain continuity,  regardless of who is in power in Azerbaijan. In the event of a change  of power in Azerbaijan, certain changes in the position of Baku are  possible, but they will most likely remain in the outline of the  general strategy, which was not initially constructive.

- On January 29, the "Tomorrow Artsakh", "Identity and Unity" and the  Artsakh Liberal Party announced the creation of the electoral bloc  "Mayilyan-New Artsakh". Prior to this, other Artsakh social and  political forces declared your support. You have to lead the  proportional list of the alliance during the parliamentary elections.  Vision of what new Artsakh can you and is going to offer the forces  supporting you?

The created block of parties will become a powerful incentive for  vigorous and decisive activity aimed at the broad consolidation of  the healthy forces of society with the aim of discussing and adopting  programs of fundamental reforms. As a result of the reforms, we will  jointly provide a safe, secure, reliable, fair, civilized and  democratic future. This is our vision of New Artsakh.

- Almost all of your competitors in the upcoming presidential  election are people from the past, who occupy the highest political  posts in the republic at different times. You are considered the only  candidate for the future, which in the light of the relatively recent  change of power in Armenia gives you additional chances to win. What  vicious phenomena of the past should not be in Artsakh of the future,  and what changes do the Artsakh people strive for today, what is  their request, expectations from the authorities?

According to our political team, the main requirement of our citizens  is reform. Our political team does not act from extreme positions,  but is a supporter of fundamental transformations. It is the desire  for qualitative changes in public administration that united the  members of our political team. We accept the achievements recorded  since 1988 in the search for a better future for our people, the  experience of our struggle and confrontation, respect our past, but  we also draw the necessary lessons from the shortcomings and gaps  that took place for objective and subjective reasons, and we fix our  eyes on future. In a different way and impossible, state building and  development is a sequential process, and stopping at any point is  fraught with the threat of stagnation. The quality of power must  inevitably be brought into line with the challenges and opportunities  of the time, the development trends of the modern world. It is for  this purpose that our efforts to unite the advanced layers of society  are directed. A specific reform program will be presented to voters  within the time period prescribed by law.