Fire in the building of the Print House localized 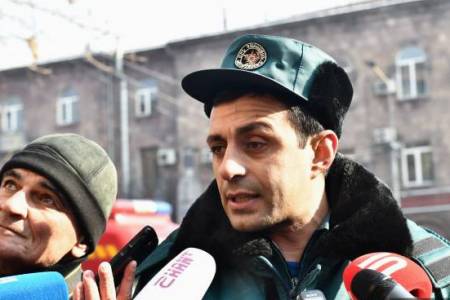 "The fire broke out, most likely due to a short circuit, I can not  say for sure. The building was de-energized with some delay, since  almost every floor is equipped with electricity via a separate power  line", he said.

At the same time, Mardanyan assured that the fire did not affect any  of the rooms on the other floors, except for the one in which the  electrical panels are located.

"There is no danger. All people from the building have been  evacuated. At the moment, checks are underway on all 15 floors of the  building>, he said, noting that it took about half an hour to  localize the fire.  As Major Mardanyan emphasized, fire extinguishing  work continues.

To recall, on January 18 at 11:47am a call was received to the  service number <911>, signaling a fire that broke out on the 1st  floor of the building of the Press House. Four combat crews from the  fire and rescue squads of the rescue department of the city of  Yerevan Emergencies Ministry of the Republic of Armenia, as well as  the operational group of the rescue and fire fighting organization  department, arrived at the scene.