Deputy Minister: A working group has been established on the creation  of an open-air museum in the Republic Square 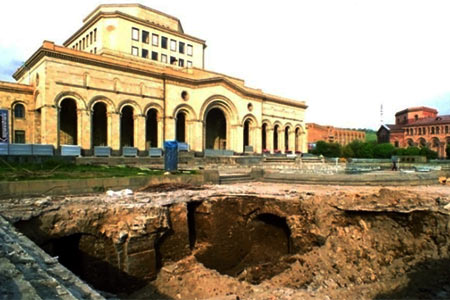 ArmInfo.A working group has been established on the issue of opening the historical layer of ancient Yerevan on the Republic Square. Deputy Minister of Education,  Science, Culture and Sports of the Republic of Armenia Narine  Khachatryan informed about this in a conversation with ArmInfo.

To recall, the underground city identified in 2003 has a length from  the former Foreign Ministry building to the tower of the Government  building. Particularly, archaeologists discovered four-meter-deep  basements built from red and black tuff belonging to the 16th-17th  centuries. At that time, they were used as living rooms, and  therefore had window openings at a certain slope for the penetration  of sunlight. Meanwhile, 17 years ago, it was decided to preserve the  discovered historical layer, fill it with sand and cover it with  asphalt.

According to the deputy minister, thorough expert discussions will be  held on the issue of turning this site into a museum object, the  results of which the public will be informed about. <The main  question is whether it is possible to discover and strengthen this  historical layer. We need to understand whether it is worth covering  this site with glass, or whether tourists can go downstairs and walk  around the ancient city.  These issues will be raised with  archaeologists and architects>, Khachatryan informed.

According to her, the point is not to open this site for tourists  this year. As noted, in 2020 this project will be thoroughly  discussed, and if all parties (experts and the public) positively  evaluate it, it will be implemented sequentially, step by step. To  recall, on January 9, Prime Minister of the Republic of Armenia Nikol  Pashinyan announced that the ancient city on Republic Square will  become a kind of museum object.