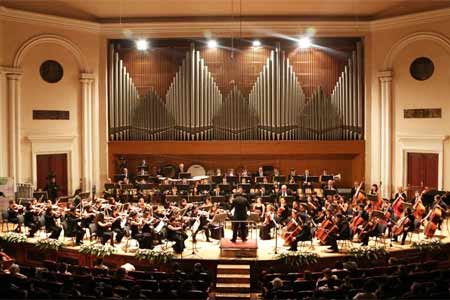 ArmInfo.The Chinese audience was impressed and delighted with the performances of the National Philharmonic Orchestra (NPO) of Armenia and received the musical  group with unprecedented warmth, the press service of the NPO reported.

The National Philharmonic Orchestra of Armenia performed 10 concerts  in various cities of the People's Republic of China.

The general producer of the National Philharmonic Orchestra Arman  Padaryan notes that the tour was held in Shanghai, Shenzhen, Wuxi,  Changshui, Changzhou, Lishui, Xiamen, Wuhan, Beijing.  "The first  Chinese tour of the band was a great success," he said.

Within the framework of 10 concerts, under the direction of the  artistic director and chief conductor of the NPO Eduard Topchyan, the  Chinese audience was presented with unique works of Armenian, Russian  and Western European composers - from the Masquerade suite  Khachaturian to the Tchaikovsky suite The Nutcracker, from the Mozart  concert to Prokofiev .

, notes Arman Padaryan, adding that the group was  awarded an unprecedented reception in all Chinese cities.

It should be noted that the tour in China was organized through the  mediation of the Chinese agencies and  of England, as well as with the assistance  of the RA Ministry of the National Olympic Committee, the Ministry of  Foreign Affairs of the Republic of Armenia, the Armenian General  Charitable Union, the My Step Foundation , the RA Embassy in the  People's Republic of China represented by the Ambassador  Extraordinary and Plenipotentiary of the Republic of Armenia Sergey  Manasaryan and other benefactors.

- is noted in the message of the  NPO.