ICG representative: In order find a compromise on new settlements,  legalistic approach should be abandoned and the issue should be  considered in political framework 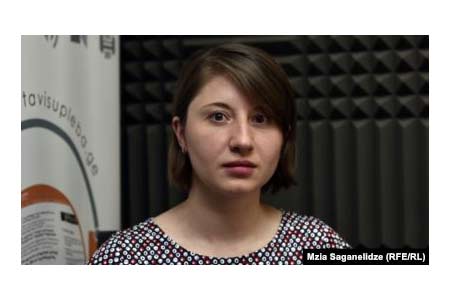 ArmInfo. Moving away from a legalistic approach based on the interpretation of laws and trying to look at the issue of freezing settlement construction from the point  of view of political measures could be a compromise solution if the  parties to the Nagorno-Karabakh conflict are actually interested in  the negotiation process. This was stated by the co-author of the  report of the International Crisis Group Olesya Vardanyan at today's  press conference in the "Media Center".

To recall, the other day, the report of the International Crisis  Group "Digging out of the Deadlock in Nagorno- Karabakh" was  published, in which the authors of the ICG report, as one of the  compromise solutions, offer a temporary freeze on the construction of  new settlements in the adjacent territories in exchange for  abstaining from legal claims or new sanctions against Artsakh and  Armenia.

She noted that the construction of new settlements in Artsakh, which  has not yet begun, is perceived by Azerbaijan as an undermining in  the negotiation process.

Vardanyan considers the fact that the issue of settlements is not on  the negotiation agenda unacceptable. <It is necessary to take into  account the fact that people live there, and they have their own idea  of why they were there and how their fate should take shape. There is  a perception in Azerbaijan that the return of lands is a fairly  simple process, it is enough to satisfy security measures and this  can solve everything, but our work shows that this is far from the  case.  The issue of settlements should be considered fully and  comprehensively, and not on the principle of "let's return two  districts or, for example, five or seven". So, she believes,  negotiations are not lining up. It is necessary to take into account  the interests of those people who live in the conflict zone, and even  if someone says that people are returning there, their interests  should also be taken into account>, she noted.

"We are well aware that the issue of status is a priority for the  Armenian side. For 25 years of the conflict, the Azerbaijani side has  never proposed any peace plan that describes what Baku means by the  status of the NKR, even in the representation of the Azerbaijani  side. Today there is nothing that could be the subject of discussion.  We only discuss the words <independence>, <autonomy>, <wide  autonomy>, and no one understands what is meant by this, it should  not be so, "she said.  According to Vardanyan, the recommendations  presented earlier by the co-chairs that the construction of  settlements is illegal and that the Armenian authorities should stop  them do not lead to anything good. <To ban something will not lead to  anything good, to ignore the birth rate in this territory means to  aggravate the problem even more, because people, looking at the  statement of the co-chairs and other foreign players, consider that  it is against them. One of the representatives of the former  leadership of Artsakh, said that he saw that when Yerevan put  pressure on them and they were forced to stop minimal assistance to  those people who lived with holes in the roofs, as a result they were  forced to build their settlements on ruins>, - she reminded.   Vardanyan also expressed concern about the fact that Azerbaijan,  especially after 2016, is rapidly building a judicial front by filing  lawsuits against Armenia with the European Court of Human Rights  (ECHR), so that even greater sanctions are introduced against  Armenia. However, now not only from Azerbaijan and Turkey, but also  by connecting other players to this process, Baku wants to put more  pressure on Yerevan, placing all responsibility on it.

<If Baku takes these measures, it will kill any conversation,  including, taking into account the important issue that concerns  settlements and those people who do not want to leave from there. The  crucial question is that new settlements should not be built in these  territories, but we understand that they exist, and on the other  hand, we understand that Baku does not want to accept them and say  that they are legal, therefore we are trying to introduce a new  direction as a call to abandon Azerbaijan's sanctions policy against  Armenia and take a pause for at least one year>, the ICG  representative suggests, noting that the introduction of a moratorium  and the beginning of substantive conversation can create  prerequisites for a compromise.

At the same time, the expert called the creation of trust  environment, noting that it's very difficult to imagine how such  important negotiations can be held without confidence-building  measures.