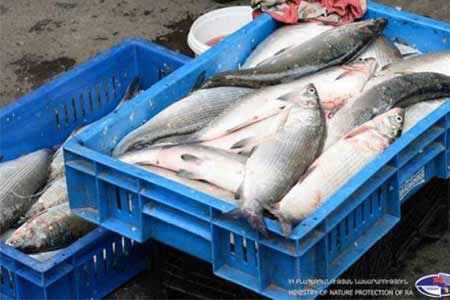 ArmInfo. For the first time in the past few years, commercial stocks of whitefish reduced in Sevan. According to the director of the Institute of Hydroecology and  Ichthyology of the National Academy of Sciences of the Republic of  Armenia, Bardukh Gabrielyan, at a press conference on December 13,  this year the commercial stocks of whitefish amounted to about 660  tons, while a year earlier - 740 tons.

Meanwhile, according to the  expert, the reason for this situation lies in uncontrolled fishing in  Sevan. Gabrielyan noted that in the past and present years there was  no control over whitefish fishing during the spawning period, which  he called unacceptable. Whitefish fishing is prohibited all year  round, however, in previous years, security measures were tightened  in the weeks that spawned, that is, from early December to  mid-January.

Meanwhile, since 2018, this practice has not been introduced, which  led to the flourishing of fish smuggling. The expert expressed  concern that as a result, in markets and streets you can see in open  sale not only whitefish, but also caviar. This circumstance, as  noted, cannot but negatively affect the population of this fish  species.

The situation with craw fish is even more depressing: in the last  couple of years, their population in Sevan has decreased 10-fold.  Gabrielyan draws attention to the fact that fishermen began to use  new devices for catching crayfish, which allow catching crustaceans  of any size, while the fishing standard is 9 cm. As a result, small  crustaceans become prey to the fishermen, which are subsequently used  as ground feed for animals.

Sevan ishkhan also becomes a victim of illegal fishing: the state for  years has allocated millions to increase its population and purchase  fry, however, grown individuals are caught in rivers, on the way to  spawning.  Thus, as the expert emphasized, the natural reproduction  of Sevan Ishkhan is 100% absent. The Institute of Hydroecology and  Ichthyology proposes a ban on fishing for fish and crayfish from  Sevan for a year in order to somehow regulate the situation.  Meanwhile, the Ministry of Nature Protection of the Republic of  Armenia, according to Gabrielyan, is not going to cooperate, and  calls the data voiced by the Institute experts false. This situation  cannot but cause concern, given that since 2018, the situation with  stocks of fish and crayfish in Sevan has significantly deteriorated.  The expert gave a negative assessment to the initiative of the  Ministry of Nature Protection to introduce a pilot program to resolve  the fishing of Sevan fish. According to the ministry, this will allow  fishermen to fish within the legal framework, but Gabrielyan is  skeptical. <A similar practice of issuing fishing permits existed  before, but did not justify itself. In addition, to date, some local  enterprises produce Sevan whitefish in the form of canned food,  although its fishing is prohibited. We are afraid that this pilot  program will render these enterprises a great service, because they  will be able to hide behind it, explaining the origin of their raw  materials>, he said.  Gabrielyan also informed that, with the  assistance of the NAS, the Institute this year acquired an echo  sounder for about 45 thousand euros, which is indispensable in the  study of fish stocks. <However, we do not have software for it, which  is quite expensive. We hope that the Ministry of Nature Protection  will help us in this matter and provide appropriate funds for these  purposes>, he said.